Reader Advisory: This book contains the use of racial slurs.

Welcome to the blog tour for Michael Mandrake’s new release, On the Run! This is the first in the PROTEKT series, which features a top-secret organization that works apart from governments to help those in need. I’m excited to host Michael’s tour here on Just Love today, because On the Run has an action-packed plot and multicultural characters!

Keep reading for an excerpt from the book, Michael’s thoughts on writing gay men of color, and your chance to win a Pride Publishing ebook of your choice!

Who would’ve thought that a British hitman would fall in lust at first sight with an American felon? It could become deadly for both.

Aiden Moriarty is a Florida ‘herbalist’ who works with a performance-enhancing drug used by many athletes. One of them is baseball star Ivan Salerno, who was caught using the drug and is now on the brink of getting suspended. Because of Ivan’s connections with a rogue mob boss, Aiden is taken into a witness-protection program, working along with baseball higher-ups until he testifies.

The mob boss, Augustine Ora, has hired former British military officer and his best hitman Devlin ‘Brit’ Crawford to do the job. Ora has instructed Devlin to go to Miami, kidnap Aiden and take him to the local airport to be transported to Havana, Cuba, to be executed by Ora’s top officers.

However, when Devlin receives the email, the pictures of the blue-eyed felon catch his eye and he is moved to go in a different direction. Instead of delivering Aiden to the airport, he has thoughts of taking him away and saving him from Ora’s wrath.

This move puts himself and Aiden, as well as his assistant, Miranda Ashley, in huge danger. Will Devlin keep Aiden safe despite the odds, or will he fail, causing Ora and his men to come after him?

Devlin winked at the young woman and heard her sigh as he walked toward the door of the fancy establishment.

I’ve still got it.

Devlin smirked to himself and adjusted his scarf around his neck to protect himself from the damp evening air. Once he’d made it to the exit, the strong wind gust nearly blew him and the door away.

“Bloody London.” Devlin clicked his tongue against his teeth and glanced up at the heavy amount of gray clouds in the sky. He hadn’t turned on the television to watch the weather, but by the looks of it, a heavy rainstorm was about to occur.

Devlin hadn’t driven, thinking he would be spending the night with William prior to returning to his loft to pack for his next trip. Now, with those plans foiled, the most important thing was to get back to his place without getting soaked.

Just as the first few drops fell on his head, Devlin placed two fingers in front of his lips and whistled for a cab. When he put his hand out, one rounded the corner, nearly splashing him with the excess water in the gutter.

Devlin hopped back and frowned. “Watch it!”

The cab driver rolled down his window. “Sorry, sir. Where ya off to?”

Devlin hopped in, closing the door behind him. “Meranti House on Lehman Street, please.” Devlin recited his address and brushed the small pellets of water off his overcoat.

“Right away, sir.” The driver seemed to perk up when he heard Devlin speak of the nicer location. People were always surprised when he said he lived in one of the most affluent spots in London. Even more so when he pulled out the large wad of bills folded inside a gold money clip.

Devlin had long tired of people misjudging him because of the color of his skin as well as his muscular build. Immediately, they assumed him to be a poor thug from the London ghettos instead of the child of a wealthy businessman.

That was the thing about his current position with Boss O, as he called him. He made no assumptions and he knew Devlin’s talents as a weapons expert along with his propensity to perform tasks without getting caught. Augustine Ora acknowledged Devlin as an intelligent bloke, and he used it to benefit them both.

Where to Buy the Book:

Unfortunately the media is filled with stereotypes. I have found that some people perceive all men, regardless of their color, as guys lacking in emotion, rough, most of the time an alpha with a bad attitude. Then there are the gay men who can sometimes be portrayed as overly girly, weak, and in some cases, a sex addict. In the early 2000’s we were blessed with Queer as Folk, showing beautiful gay men of all types, embracing their sexuality, dealing with the same issues as straight couples trying to survive in the modern era. As brilliant as QAF was, it was missing a key element. In my opinion, a gay man of color who was also a main character would’ve added something to the show.

Sometime later, Noah’s Arc came along. From the couple of episodes I did see, it portrayed gay men of color in a positive light. Seemingly, this series might not have been interesting enough to keep running so it disappeared without a trace.

What about in fiction? These days we have a wealth of colorful gay characters in many books. The question is how do we write them? Do we draw on the stereotypes? Black or Hispanic men who are angry and intense; Asian men who seem timid and weak. Those are just a couple of examples. Do we need to add this to our books for them to seem real? In my estimation we don’t. I often wondered why authors, whether it be books, TV, or movies don’t often make characters, especially gay male characters of color, who don’t fit that mold. Sure, you can add to the setting to make it more “real”; a young black man from a poorer neighborhood.

What’s my point here? When I write a gay man of color, I try to avoid the stereotypes unless it is a central part of the plot. I feel people should be written as people, without pulling from the so called mold.

Regardless of race or nationality or orientation, we’re all human with unique traits and attitudes that make us stand out from others. Characters should be treated in the same fashion. 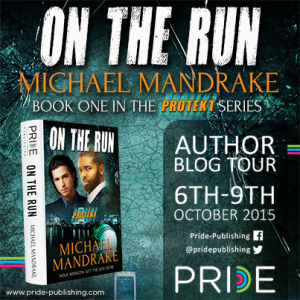 Michael Mandrake pens complex characters who are already comfortable in their sexuality. Thorough these characters, he builds worlds not centered on erotica but rather the mainstream plots we might encounter in everyday life through personal experiences or the media.

Click on the logo below to enter Pride Publishing’s October blog tour competition for the chance to win an eBook of your choice, not including boxsets or anthologies.

2 thoughts on “Blog Tour: “On the Run” by Michael Mandrake (Excerpt, Interview, and Giveaway!)”