Please note this book was reviewed prior to the revelation of author’s identity and actions. Please read this statement from Riptide Publishing for more information. [Note: Dreamspinner Press is no longer selling books by this author.]

Rating: I have chosen to remove my rating for this book.

Just in time for Halloween, one of the most deliciously creepy books that I’ve ever had the pleasure of reading. Of course, it’s Santino Hassell, so you know it’s going to be dark and angsty, but that’s totally okay because hot damn can he write!

Stygian is a southern gothic, paranormal horror novel loaded with romantic suspense. It’s like if True Blood was written by Stephen King… but with more pretty tattooed gay musician boys.

Okay, maybe you’re not sold yet. Here’s why you should put Stygian at the top of your To Read this Halloween:

“Stygian wasn’t just a band. We were like a family, and we need that. All of us.”

The four members of Stygian are Watts, Quince, Kennedy, and Jeremy. They are all precious and talented and gay and seriously emotionally messed up. ALL OF THEM. I want to wrap them in a blanket and feed them ramen all day.

Kennedy was the grim one, tall and serious with don’t-fuck-with-me-or-mine vibes; Watts was brash and mean but so talented no one ever cared; and Quince was full of recklessly whimsical smiles, naive enthusiasm, and the primary force keeping Watts from flying apart.

“I may be the youngest, but that doesn’t mean the rest of you get to treat me like I’m helpless or stupid.”

Jeremy is the odd man out. He’s new to the band, the drummer they picked up after the death of their previous one, but there’s no possible way he can fill those shoes. And I LOVE HIM SO MUCH! He’s pretty emotionally damaged after his brother dies. All he wants is a place to belong, and he wants Stygian to be that place.

I think Jeremy is one of the most fantastically complex and gorgeous characters that I’ve read in a very long time. He’s so real that I can practically hear the story in his voice. And while he’s fragile, he’s sure as hell not going to let Watts or anyone else walk over him, which I really respect!

“Sorry. Next time I’ll roll over and eat his bullshit with the correct utensils.”

“You know, looking for the source of a mysterious sound is generally how people die in scary movies.”

This is not really a horror novel, so much as a creepy paranormal novel. But I love the horror elements, and the slow-reveal mystery that grows and builds throughout the story.

1: of or relating to the river Styx
2: extremely dark, gloomy, or forbidding

The scariest parts here aren’t the things that go bump in the night, though; it’s the psychological elements, people being manipulated, emotions being turned around, and the slow decay of the band as tensions and darkness rise. I get chills thinking about it!

“You could have me.”

In what Watts describes as “the queerest band since One fucking Direction”, Jeremy is the odd one out. Quince and Watts have a no-emotions-attached arrangement that involves having wild sex at every spare moment. Kennedy goes through one-night-stands like they’re going out of style. And Jeremy… quietly nurses his crush on Kennedy, knowing it will never come to pass. 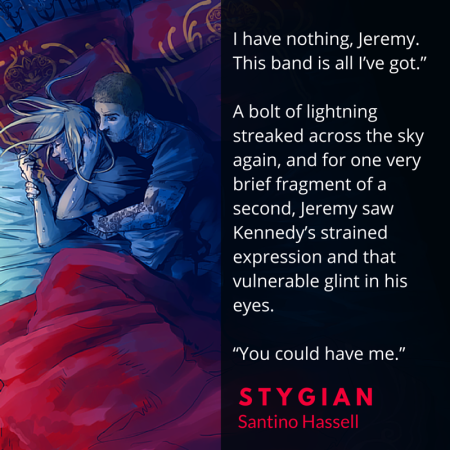 I love bittersweet relationships, especially ones with tons of longing and ridiculously heavy UST.

And can I just say that Kennedy hits, like, ALL of my buttons? Big, tattooed, gruff, but secretly a giant marshmallow? Oh yes please!

If not, go check out the two (free!) prequels: Feeling You (on the DSP blog) and A Night in the Life (at Binge on Books).

And then go curl up under the covers with all of the lights on bright and read this eerie, beautiful novel.