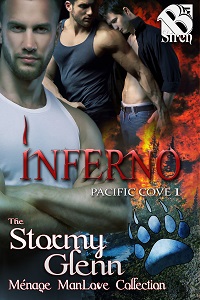 I don’t know why I bought this book. I honestly cannot tell you what my thought process was, to make me decide to buy this. I mean, I love cheesy erotica, and shifter novels, and twins, and probably all of these things factored in. Plus, the writing in the sample chapter was solid, definitely readable.

But I spent the entire time I was reading it wishing I’d spent a few bucks on a cup of coffee and donut instead.

Still… a whole lotta “nope” for me!

1. Stop talking about “owning” people in a relationship. It’s not sexy. It’s creepy.

Abe and Ben are alpha males. They’re shifters, okay, I get it. But they alternate between treating Danny like he’s a piece of hot ass that they can own, and like he’s a fragile vase to put on a shelf. Danny is obviously a grown up. He’s survived his crap-tastic family, he’s going to school, supporting himself. Yes, he’s super klutzy, but he’s obviously not bothered by it.

So why do Abe and Ben have to act like he’s a cow that they bought at auction?

“Do you know the victim, sir?”

Ben glanced at the detective taking his statement. “Yes, his name is Daniel Lake.” He didn’t care if they hadn’t gone through the official commitment ceremony. Danny was his and Abe’s and he dared anyone to say otherwise. “He belongs to me and my brother.”

Danny meets Abe and Ben. He has sex with them like a day later. It’s true love.

Even Danny points it out in the novel… just because they’re mated doesn’t mean they’re instantly compatible.

“Are you sure about this?” Danny asked hesitantly. “I mean, how can you know for sure we’re supposed to be together? This isn’t a romance novel.”

(Of course, two seconds after saying this, they’re having sex. So.)

And then there’s the background relationship between Nurse Betty and Vinnie (one of Danny’s friends). This novel happens over like two days. At the beginning of the novel, Danny introduces them. TWO DAYS LATER THEY’RE PLANNING THEIR WEDDING. Seriously.

Oh my god. Stop it. Please.

Danny had just experienced six orgasms in less than an hour, no doubt a record for pretty much any man breathing.

And then the double penetration, which was another huge WTF moment.

4. Implying a plot but then not following through

Bear shifters! Wars between shifters and hunters! Great tragedies in the past! Abe and Ben’s family! All things that were mentioned like once, and then ignored unless needed.

And don’t even get me started on the “villain” of the story. Let’s just say it was even more unbelievable than the six orgasms in 60 minutes thing.

There’s erotica that’s so bad that it’s good. This is not that. I was hoping it would be, because I really love cheesy erotica, but just nope. A whole load of nope. (But hey, it’s really short, so there’s that going for it?)

One thought on “Book Review: Inferno, by Stormy Glenn”