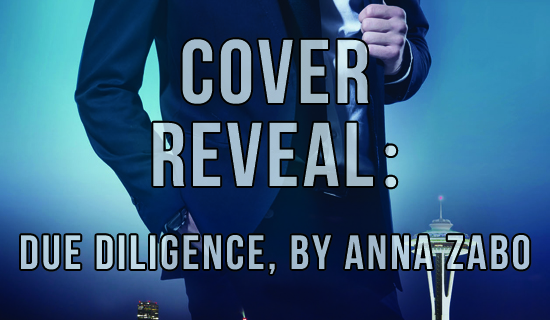 I’m so excited today to bring you the cover reveal for Anna Zabo’s upcoming novel, Due Diligence! This novel is set in the same universe as Takeover and Just Business but is a stand-alone with a new  couple, and I can’t wait to read it.  While the novel isn’t out until June, Anna has also shared a brand-new (seriously sexy) excerpt with us!

Of course, don’t forget to check out the giveaway at the end of the post… you could win a copy of Takeover or Just Business!

So without further ado… 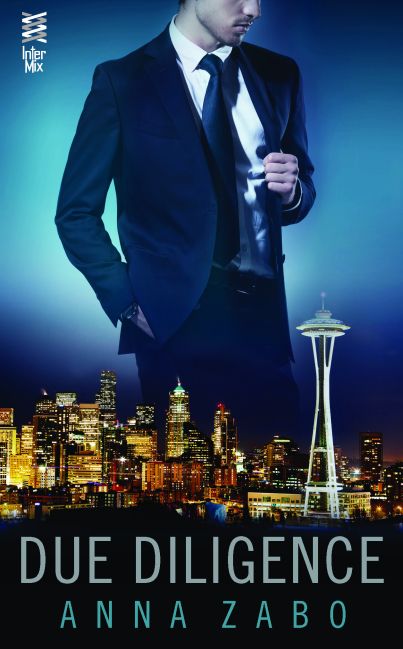 A business trip leads to a surprise encounter with an old flame in this sexy romance from the author of Just Business.

After Fazil Kurt breaks up with his girlfriend, a business trip to Seattle offers some much-needed time away. Sent by S.R. Anderson Consulting, Fazil is there to help audit Singularity Storage, a company they are trying to save. His first discovery is intriguing to say the least: One of Singularity’s engineers is Todd Douglas, Fazil’s first love.

He knows better than to get personally involved on a job like this. Back in high school, Todd broke Fazil’s heart more times than he could count, but both men have grown so much since then—and Fazil never could say no to Todd…

From Anna: I should note that my editor hasn’t seen this, so it may change before the release, but here’s a little snippet of Fazil and Todd getting back together. Which is probably a horrible idea, but hey. Billionth time is a charm, right?

Fazil strode next to Todd as they headed to where he’d parked behind the little strip mall, but his eyes were focused on the ground, brows furrowed and his lips turned into that little pout he used to get when his mind was whirling too fast.

Same old Z. But also a different Z, too. Two parts to the same man. Todd was far more interested in the grown-up Fazil. He’d had it up to his eyeballs with the high school version and his antics. This Fazil better not try to pull any of that crap now.

“Is there a reason you parked back here and not out front?” Fazil surveyed the mostly empty lot.

A quick press of the car fob unlocked the doors and Todd put the leftovers in the back seat. “Yup. Plenty of co-workers drive this way to lunch.”

“Don’t want to be seen with me?” And there was that other pout, the one that spoke of insecurities and worry and never quite being good enough. He’d never understood it back then.

But now? Todd chuckled. “I don’t mind being seen with you. But I didn’t know how lunch would go.”

“How do you think lunch went?” Fazil lifted his chin.

“I don’t know.” Todd stepped in, entirely too close to him and Fazil’s inhaled sharply, but didn’t step back. “How’d lunch go, Z?”

Standing like this, inches apart Fazil had to look up. Not much, but enough to lengthen that beautiful neck of his. “It brought back a lot of memories.” His voice was soft but so full of depth.

“Yeah.” It had. So many. Memories of those soft lips against his. Breathless whispers in the middle of the night. “I really want to kiss you, Fazil.”

He swallowed and his Adam’s apple bobbled. His brown eyes couldn’t get much wider. “I—won’t say no.”

“But will you say yes?” A long moment passed, and a sharp pit of disappointment opened in Todd. He stepped back. “If it’s not a yes, then it’s a no. I don’t play games and I don’t read minds.”

Fazil’s stiffened, his jaw setting hard. “But this whole thing has been a game! A Turkish place. A sexy gay waiter.” He waved at the strip mall, the wind catching the curls in his hair. “And yes. Yes, okay? I want you to kiss me.”

Well, wasn’t someone angry when pressed. Todd stepped in, cupped a hand behind Fazil’s neck, and kissed him hard. Fazil opened to Todd’s tongue, tentatively at first, then relaxing his whole body into Todd with a tiny groan. Hard, they were both hard and grinding against each other.

Todd tangled one hand into Fazil’s curls and cupped his ass with the other, pulling him even closer, rocking into him to let him know exactly what he wanted and how badly he wanted it.

Fazil fisted the fabric of Todd’s shirt in his hands and he tasted of pecans and honey and all the wasted years between them. He gave back as good as he got, exploring and sparing with an ferocity he’d never managed in high school.

A day’s worth of scruff covered Fazil’s jaw and chin and Todd indulged in the taste of that skin and the rough scrape against his lips before he pulled back. Not far, but enough to look Fazil in the face.

His breathing was shallow and his eyes were bright and dancing with something that might have been hope, but could have been fear. “Good idea to park in back.”

Todd stole another kiss, this one slower and sweeter, letting his hands drift down Fazil’s back even as Fazil found Todd’s ass and pulled him closer.

As if they could manage that without removing clothing.

Fazil had been Todd’s first kiss. Since then, he’d kissed a lot of guys—way too many to even count and quite a few to chase away the memory of this very man. None of them had ever had the sweet mix of compliance and desire that Fazil seemed to put in every move of his lips. Yes, I want more. Yes, I’m yours.

Todd broke the kiss. “We should go back to work.”

They untangled from each other, both still rock hard, and in the awkward moment that followed, they climbed into their respective sides of the car.

Todd tried not to cringe, tried not to have his heart drop when Fazil stared out the passenger-side window and worked his jaw as he took them back to Singularity. But then he settled into his seat and laid his hand on Todd’s thigh. “Thank you. For lunch. For— Thank you.”

Todd entwined his fingers into Fazil’s. “That’s what friends are for. And you’re welcome.”

Fazil stroked his thumb along Todd’s fingers. “Friends. I thought you might hate me.”

Todd shook his head. “I’ve never hated you. I hated what you did.”

Fazil flinched but didn’t pull his hand away. “I hated what you did, too.”

“What is it that you think I did?” He could only snatch a quick glance, given the busy road.

And more. Much more. “Let me show you around this weekend. We can catch up then.”

Silence. Fazil rubbed his thumb over Todd’s knuckles. Finally, he exhaled. “Yeah, okay. Though—” He turned his head, and Todd looked over to meet those stunning dark eyes. “This probably isn’t the best idea.” He lifted their hands.

Todd swallowed a laugh. It was the best idea he’d had in years. Fazil in his arms. Maybe in his bed. “You going to get in trouble with your boss?”

He was startled by Fazil’s laughter. It was joyful and almost too loud. “Oh, fuck no. Only if it causes me to screw up my work. Sam’s the last person who’d yell at me. That’s why he’s in Pittsburgh.”

He tried to remember what he’d read about Sam Anderson that would bring understanding to those words. He knew Sam was a superstar—that’s why his team was here to fix Singularity—but why he stayed in Pittsburgh? “I always thought it was because of the whole startup boom there. And the universities.”

“Well, there’s some of that,” Fazil said. “But no. He fell for one of his employees. Hard enough to come out of the closet and stay in the city.”

“So, no rule about dating.”

“Nope. Just one about not fucking up the job too much because you’re dating. Or fucking.”

That…was interesting. “Must be a fascinating place to work.”

Anna Zabo writes contemporary and paranormal romance for all colors of the rainbow. She lives in Pittsburgh, Pennsylvania, which isn’t nearly as boring as most people think.

She has an MFA in Writing Popular Fiction from Seton Hill University, where she fell in with a roving band of romance writers and never looked back. She also has a BA in Creative Writing from Carnegie Mellon University.

Goodreads Link for Due Diligence

I’m giving away an eBook to two lucky winners! Winners will receive either Takeover or Just Business (their choice) via Amazon or ARe. Click on the image below to head to the Rafflecopter page. Contest is open world-wide. 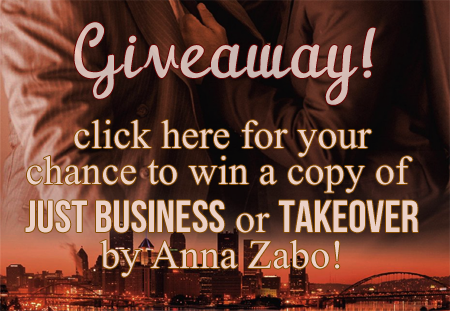 4 thoughts on “Cover Reveal: Due Diligence, by Anna Zabo (Plus Excerpt & Giveaway!)”