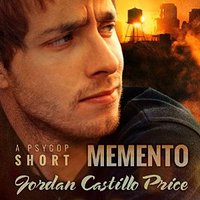 In Short: An incredibly enjoyable listen, and Gomez Pugh proves that not only can he perfectly voice Vic, but he’s also a spot-on Jacob!

My Review of the eBook can be found here.

Do clothes make the man? Jacob Marks cuts an impressive figure in his tailored suits, but Victor Bayne is another story. Nowadays, Vic does his ghosthunting in off-the-rack blazers, polyester blend slacks and cop shoes with nonskid soles. But back before he was a PsyCop – or even officially psychic – he rocked combat boots and a beat up biker jacket, and lots and lots of punk T-shirts. When he finds a faded tee in the back of a drawer, he’s eager to lob it in the trash. Jacob, however, finds himself waxing sentimental about Vic’s younger, more carefree days.

It’s been said before, but I’ll say it again… Gomez Pugh is the voice of Victor Bayne. But he also does a brilliant job of voicing the rest of Jordan’s characters. With Memento, Pugh gets to do something different: an audio book almost entirely in the voice of Jacob Marks, Vic’s partner.

At just over half an hour, this is a perfect bite-sized listen; long enough for a commute into work, without having to sit in the parking lot, watching the clock, until the chapter ends. And I absolutely loved the ebook, so I was seriously jazzed to hear the audio version as well!

What I really enjoyed were the moments where Pugh slid a bit of Jacob’s lust for Vic into his reading, just subtly enough that it caught me off guard and had me grinning:

But what I love most is how he captures these tiny nuances of Jacob’s character. Audio book narrators should have a calm, soothing voice, but not so bland that they put you to sleep. But they should also have character, and Gomez absolutely nails it.

Gomez normally narrates the PsyCop books from Vic’s point of view… so having him change that up is a delightful treat. Pugh’s voice drops to a low, soothing rumble when he’s speaking for Jacob, and it perfectly fits the character that I’ve imagined based on Jordan’s writing.