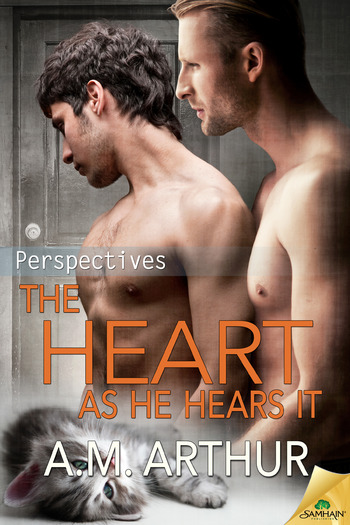 And with Henry’s happiness paramount, Jon is on a mission to help Henry meet his recently discovered grandson.

Isaac Gregory hasn’t set foot outside for the past year. He has everything he needs delivered, and his remaining family knows better than to visit. When a complete stranger shows up claiming to be his grandfather—with a distractingly handsome younger man in tow—his carefully structured routines are shaken.

Despite his instant attraction, Jon senses Isaac is too fragile for a relationship. Yet tentative friendship grows into genuine companionship. And when Henry’s health begins to fail, they realize Fate brought them together for a reason

A.M. Arthur is an insta-buy author for me. She writes the most stunning characters, with complex and deeply gorgeous relationships that show how beautiful romance is. The Heart as He Hears It is all of the above, but it’s also a look at the strength people have in the face of incredible odds.

When Jon first appeared in a previous novel, I got the fleeting impression that he was a nice guy and a good friend, but seeing the depth of his selflessness in this novel was staggering. He’s so genuine and caring, the kind of guy who wants to take care of others because he never had anyone to take care of him.

But Isaac was my favorite. It’s hard to write a character with so much anxiety and social detachment who the reader can still connect with, but A.M. managed it!

What I think sets this book apart from other romances with characters who have severe social anxiety is the patience. No one pushes Isaac to get outside. No one tells him that he’s wrong, or sick, or damaged. Jon especially is there to support him, but he’s 100% about letting Isaac do the work himself, and that’s really important for me to see in a novel about a disability.

This books is just gorgeous. It’s romantic and heartbreaking and shows humanity at its best, multi-faceted and strong.

I loved this novel. If you want a sweet romance with characters trying to find their place and heal, and with emotional scenes that will leave you aching, then you need to check this one out. Highly recommended!

A.M. Arthur was born and raised in the same kind of small town that she likes to write about, a stone’s throw from both beach resorts and generational farmland.  She’s been creating stories in her head since she was a child and scribbling them down nearly as long, in a losing battle to make the fictional voices stop.  She credits an early fascination with male friendships (bromance hadn’t been coined yet back then) and “The Young Riders” with her later discovery of and subsequent love affair with m/m romance stories.

You can find A.M. on her website at http://amarthur.blogspot.com/

You can buy The Heart as He Hears It from:
Publisher
Amazon.com
ARe
iBooks

One thought on “Book Review by El: The Heart as He Hears It, by A.M. Arthur”