Check out the bottom of the post for your chance
to  win an ebook copy of Withered + Sere! 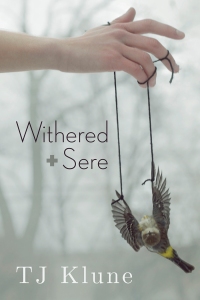 Once upon a time, humanity could no longer contain the rage that swelled within, and the world ended in a wave of fire.

One hundred years later, in the wasteland formerly known as America, a broken man who goes only by the name of Cavalo survives. Purposefully cutting himself off from what remains of civilization, Cavalo resides in the crumbling ruins of the North Idaho Correctional Institution. A mutt called Bad Dog and a robot on the verge of insanity comprise his only companions. Cavalo himself is deteriorating, his memories rising like ghosts and haunting the prison cells.

It’s not until he makes the dangerous choice of crossing into the irradiated Deadlands that Cavalo comes into contact with a mute psychopath, one who belongs to the murderous group of people known as the Dead Rabbits. Taking the man prisoner, Cavalo is forced not only to face the horrors of his past, but the ramifications of the choices made for his stark present. And it is in the prisoner that he will find a possible future where redemption is but a glimmer that darkly shines.

The world has died.

This is the story of its remains.

Withered + Sere is completely unlike any other Klune novel that I’ve ever read. It’s dark and gritty, a bleak look at a future world where sanity is over-rated and survival means everything. And at the heart of the novel is Cavalo, an unreliable narrator that left me questioning everything I thought I knew.

In a word, this novel is breathtaking.

What sets W+S apart for me are the creeping emotions and the way I couldn’t predict what would happen next. Cavalo’s advancing insanity was eerie, but written so perfectly that I was never quite sure if I was going insane as well. And when he meets and imprisons a member of the Dead Rabbit gang, everything begins to change… including his emotions, as he realizes that being insane doesn’t mean losing his humanity.

But he also knew it wasn’t.

Adding to the achingly perfect prose are ten jaw-dropping illustrations by artist Blake Dorner. They match the tone of the story perfectly, and augment the experience by giving you a teasing glimpse into the post-apocalyptic world that Tj has created.

You can read my interview with Tj and Blake here…
and check out one of Blake’s stunning illustrations!

This is the first of two books in the Immemorial Years series, and Book Two isn’t out until the end of summer, but this is one novel that you definitely need to pick up and read immediately.  This book will blow you away and leave you gasping.

(Or cursing. I may or may not have sent a capslock-filled email to Tj when I finished.)

Tj is the author of some of my favorite books, including the Bear, Otter, and the Kid trilogy (soon to be a quartet!) and the asexual stoner romance How To Be A Normal Person (my review!).

When TJ Klune was eight, he picked up a pen and paper and began to write his first story (which turned out to be his own sweeping epic version of the video game Super Metroid—he didn’t think the game ended very well and wanted to offer his own take on it. He never heard back from the video game company, much to his chagrin). Now, over two decades later, the cast of characters in his head have only gotten louder. But that’s okay, because he’s recently become a  full-time writer, and can give them the time they deserve.

Since being published, TJ has won the Lambda Literary Award for Best Gay Romance, fought off three lions that threatened to attack him and his village, and was chosen by Amazon as having written one of the best GLBT books of 2011.

And one of those things isn’t true.

I’m giving away an ebook copy of Withered + Sere to one lucky winner! It’s super easy to enter… just leave a comment telling me what your favorite illustrated book is (adult/kids/graphic novel), and you’re entered to win! Want to enter twice? Check out my interview with Tj and Blake and comment there as well!