quote graphics in this post are by k.a. merikan

Being kidnapped by two werewolves is an adventure after all, right? Right?!

If Quinn wants to get the best photos for his travel blog, no gate is too tall, and no ‘do not enter’ sign actually means he won’t go in. What he finds in a hidden exclusion zone by Chernobyl blows his mind. Mutants? Monsters? He doesn’t know, but he is bound to find out when not one but two of them break into his hotel.

Too bad the rules and attitudes they have toward sex don’t match Quinn’s at all.

Born with a disabled hand, smaller than the other werewolves, Dima is the lowest of the low in his pack, but when he meets the loveliest human he’s ever seen, he knows his luck has changed.

The last thing he expects though is his beloved friend Nazar turning on him once Dima’s affection for Quinn deepens, and he refuses to be mounted by Nazar anymore.

Nazar is a high ranking soldier in his pack, but in his powerful body hides a gentle soul, and all he wants is to escape the pack with Dima. But once Dima claims Quinn as his, secrets Nazar has so far kept hidden rear their ugly head.

The werewolf language doesn’t have words to describe what they crave, so Quinn might be the only one to help them solve the puzzle of the desires that go against the rules of their pack.

Please see additional warnings at the end of the review.

On the surface, this book seems pretty easily summarized by this quote:

Yeah, this book is about two gay werewolves in the Chernobyl radiation zone and the hipster dude who stumbles on them, has a bunch of sex with them, and falls in love with them. 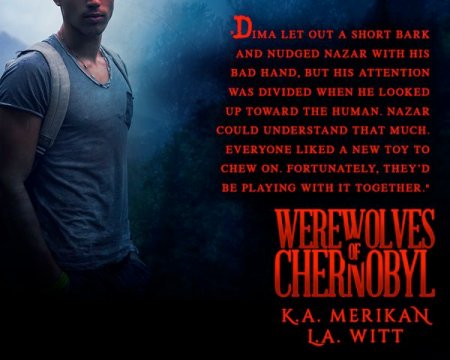 But there’s more to this book than meets the eye! Some of the issues that were brought up were really difficult for me to accept, but I felt like the authors (all three of them!) did a great job of dissecting those issues.

So. Gay werewolves: check. What else?

Yeah, pretty deep for a novel with three dudes boning in the woods, right?

The plot is pretty straight-forward, so I won’t go into that. What I do want to talk about is the relationship between the two bodarks, Nazar and Dima, and the way Quinn’s introduction to their relationship helps to change it.

Nazar and Dima are both bodarks (aka werewolves), but Nazar is big, strong, and tough while Dima is smaller and weaker, with a deformed arm. Because of the animal dynamics in their pack, Nazar tops Dima and never the other way around. But Dima sees himself as dominant, even if no one else does. When he meets Quinn, he finds someone with whom he can assert that dominance. Watching the relationships unfold and evolve was a fantastic treat, and very well done!

There are a lot of issues with consent, too, but again all within the context of the wolf hierarchy.

If he wanted to keep the attention of a bodark like Nazar, he had to submit and get whatever he could out of the experience.

All three characters have sex unwillingly at various points in the novel. Dima submits to Nazar even though he really doesn’t want to. Quinn submits out of fear for his life, even though he is attracted to both Nazar and Dima. But two of these characters aren’t human, and I think it’s important to remember that when determining how consensual the relationship is.

What I didn’t like was the predictability. The authors have created this elaborate, gorgeous world with incredible relationships (both romantic and pack-related, as I particularly enjoyed the interactions between Dima and the other pack members, who are cruel as only animals can be.) But plot-wise? Meh. I was never surprised. I was never curious about what happens next, because I had no doubt about what would happen.

It’s not a bad thing, especially given the other ridiculously fun and surprisingly complex parts of the story. And probably it wasn’t intended to be unpredictable. I mean, c’mon. Gay werewolves.

Final verdict: You should read it. It’s hella fun, very well done, and blends the voices of three great authors together!

Please note: Portions of this novel read as dubious consent to me, but I understood it within the context. Also, there are scenes of borderline bestiality (including knotting), with sex while one is human and the other in bodark form. This didn’t bother me personally, because the characters retain their human intelligence and much of their human physiology, but still something to be aware of.

L.A. Witt is an abnormal M/M romance writer who has finally been released from the purgatorial corn maze of Omaha, Nebraska, and now spends her time on the southwestern coast of Spain. In between wondering how she didn’t lose her mind in Omaha, she explores the country with her husband, several clairvoyant hamsters, and an ever-growing herd of rabid plot bunnies. She also has substantially more time on her hands these days, as she has recruited a small army of mercenaries to search South America for her nemesis, romance author Lauren Gallagher, but don’t tell Lauren. And definitely don’t tell Lori A. Witt or Ann Gallagher. Neither of those twits can keep their mouths shut…

You can find L.A. Witt on her website at http://www.gallagherwitt.com/.

K. A. Merikan is the pen name for Kat and Agnes Merikan, a team of writers, who are taken for sisters with surprising regularity. Kat’s the mean sergeant and survival specialist of the duo, never hesitating to kick Agnes’s ass when she’s slacking off. Her memory works like an easy-access catalogue, which allows her to keep up with both book details and social media. Also works as the emergency GPS. Agnes is the Merikan nitpicker, usually found busy with formatting and research. Her attention tends to be scattered, and despite pushing thirty, she needs to apply makeup to buy alcohol. Self-proclaimed queen of the roads.

You can find K.A. Merikan on their website at http://kamerikan.com/.

Buy Werewolves of Chernobyl from Amazon.