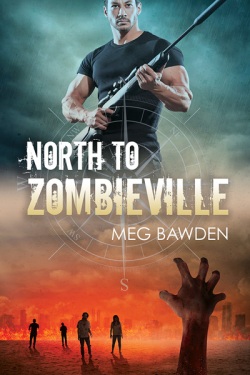 The year is 2028, and Dallas and Raleigh Jenson are torn apart when a worldwide zombie apocalypse ravages their home of Townsville, Australia. After a year of searching, Dallas, a former Australian army rifleman, finally reunites with Raleigh, but it’s not like old times. Not only do they have zombies to contend with, but also other humans, changed by desperation and willing to do anything to survive.

Dallas and Raleigh have changed too. So much so, that Dallas struggles with the idea that Raleigh no longer needs or wants his protection. But they will need to rely on each other and find strength in their love as they are forced to evade zombies and watch their friends die. As they fight for their lives in a brutal landscape where every supply and every step toward a potential cure is a battle to the death, only their trust in each other can keep them from perishing.

I wanted to like this book, I really did. I wanted this to be an edge-of-your-seat thriller where you eagerly anticipate the sweetness of the MC’s reuniting after a long, harsh year spent trying to survive and you know you’re going to relish that moment because you’ve waited half the book for it. But when the MC’s are separated in the first chapter, then quickly reunited in the second chapter and you don’t even have a chance to anticipate that climactic scene, it’s kind of a let down.

So you move on. You decide to settle in and enjoy the tension that comes with a good zombie book. You start to care for the MC’s and perhaps some of the side characters and you wait to see if everyone will survive unscathed. But when you keep reading and realize that you’re not really growing attached to any of the characters in the book, that tension is removed and with it, the whole point of a zombie story.

And that’s really disappointing. Because you need to feel something for the people in the book if you’re going to start rooting for them. It’s essential to the enjoyment of any story.

Dallas is an okay character. He’s kind of your typical alpha male, ex-military type who manages to successfully set up a home base with a group of people he’s managed to save during his year apart from Raleigh. His only focus is to be reunited with his husband and makes it clear to anyone who tags along with him that it is his main priority. Raleigh, on the other hand, comes across as spoiled and whiny. After being rescued by another military man when he and Dallas were originally separated, he has supposedly changed to become tougher and more resilient (or so he likes to tell everyone). Sadly, those qualities are absent throughout most of the book and I was almost hoping he’d become zombie fodder at one point.  Dallas is almost constantly put in the place of either defending Raleigh or making excuses for him to the rest of the group.

Thankfully, there were a few decent sex scenes but the reunion sex felt cloying and unrealistic. After being separated for so long, I’m not sure that relaxed, gentle teasing would be foremost on your mind. I was hoping for a long, emotional scene between two exhausted men grateful to be back in each other’s arms and instead I got flippant sex talk. Disappointing.

The zombies themselves had an interesting twist, at least. The book featured your ‘typical’ slower, lumbering zombies and then there are ones that are bigger, faster, stronger and beginning to show some signs of cognitive reasoning. Although the reasons for that are left unresolved, it does set the scene for a second book. The second book will also find our gang continuing the search for a mysterious scientist who is rumoured to have the zombie cure.

It’s really unfortunate that this book just didn’t do it for me. I really do love zombie books. I love the feeling of almost not wanting to turn the page because you are so invested in the scene and the characters that you don’t want to see anything bad happen. Sadly, that wasn’t the case here. Instead, I  was turning the pages hoping for something – anything – to happen that would tweak my interest. Alas, I found myself waiting in vain.

Meg Bawden was born and raised in North Queensland, Australia. She’s loved stories since before she can remember and has always enjoyed creating characters of her own, even if it did begin with drawing faces on toilet rolls and giving them names. Writing has always been a passion of hers and she’s loved the M/M genre since 2004, the first book she read being Rainbow Boys by Alex Sanchez.

Writing M/M since 2007, Meg has never had the confidence to attempt publishing her own stories, but in 2015, she decided that it was all about to change thanks to the amazing friends she’s made in the M/M genre and their support and encouragement. So watch out, world, Meg Bawden is coming out to have some fun!

Buy North to Zombieland from:

One thought on “Book Review by Gillian: North to Zombieville, by Meg Bawden”