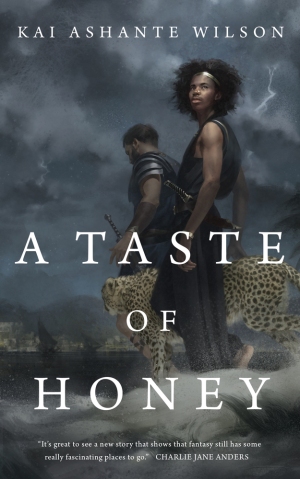 A Taste of Honey, by Kai Ashante Wilson
Standalone novella in The Sorcerer of the Wildeeps universe
Publisher: Tor.com Publishing
Release Date: October 25, 2016

Long after the Towers left the world but before the dragons came to Daluça, the emperor brought his delegation of gods and diplomats to Olorum. As the royalty negotiates over trade routes and public services, the divinity seeks arcane assistance among the local gods.

Aqib bgm Sadiqi, fourth-cousin to the royal family and son of the Master of Beasts, has more mortal and pressing concerns. His heart has been captured for the first time by a handsome Daluçan soldier named Lucrio. In defiance of Saintly Canon, gossiping servants, and the furious disapproval of his father and brother, Aqib finds himself swept up in a whirlwind romance. But neither Aqib nor Lucrio know whether their love can survive all the hardships the world has to throw at them. 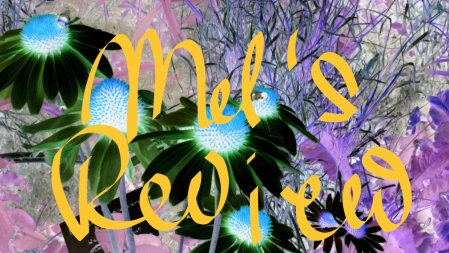 This review is really hard to write because it’s very important to not give anything away – which would ultimately ruin the book – yet still explain and show enough, so you can see why I loved this book.

What stands out for me are

I find it actually hard to explain why I like the language so much. Compared to a lot of other books it’s very distinct; both full of imagery and simplicity, yet seeming incredibly smart.

Aqib’s story is told in the way of snapshots highlighting parts of his life’s timeline, which is something that I really enjoyed. It was also kinda painful, though, because my mind had to fill in the blanks and I wondered why and how everything fit together. I have to say that I guessed – or hoped – for the resolution around the 75% mark and absolutely love what the author did here and how. The reading experience was amazing because of it.

The setting is epic. There’s much we are shown and much more that is there to explore. I think I’ll read the author’s other book in this world as well because it has a lot of potential. It’s mainly about the experience, though, as not much is explained, and maybe even not enough and too much left open. There was also a part in the book which was kinda confusing to me, which is the reason why I am deducting half a star.

The romance is especially sweet in the beginning of the book and I liked the insta-connection Aqib and Lucrio shared. Since Aqib’s society is homophobic to the extreme (it’s not in your face in the book most of the time, but homosexuality is completely oppressed), Aqib has a difficult choice to make.

Most would only ever guess at who and what was most precious to them—up until the day of loss: then they’d know—and most would also have to guess at why and how, or what might have been.

The romance takes a backseat in the book, actually, and I wish there had been a little bit more in the end, but I absolutely recommend the book to fans of science fiction and fantasy who are looking for something unique and very well written.

Kai Ashante Wilson’s debut novel The Sorcerer of the Wildeeps won the 2016 Crawford Award. His stories “Super Bass” and the Nebula-nominated “The Devil in America” can be read online gratis at Tor.com. His story «Légendaire.» can be read in the anthology Stories for Chip, which celebrates the legacy of science fiction grandmaster Samuel Delany. Kai Ashante Wilson lives in New York City.

You can purchase A Taste of Honey from:
Tor.com
Amazon

3 thoughts on “Advanced Book Review by Mel: A Taste of Honey, by Kai Ashante Wilson”