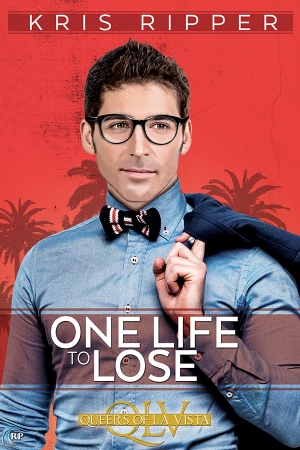 Cameron Rheingold is the kind of guy who takes a book to a bar. He’s a loner by nature, but he has to engage with the community to keep his movie theater business afloat. When two young men stay after a Cary Grant film showing to chat, Cameron thinks he might have made some new friends—but their interest is more than friendly.

Josh is charismatic, and every smile is a little bit seductive. Keith is sweet and kind, with a core of steel Cameron can sense even when Keith’s on his knees. Cameron is willing to be the couple’s kinky third, but that’s it. He refuses to risk complicating things with his growing devotion, even if being with Josh and Keith feels more right than anything else ever has.

When the three of them are attacked by the killer roaming La Vista, Cameron must decide what’s more important: pretending the assault never happened and he’s the same loner he used to be, or coming clean to Josh and Keith about how much he loves them, even if they can never return his feelings.

Reading One Life to Lose was like receiving a hug; the kind that makes you feel whole, that nurtures and heals you, that strips away all barriers—the best kind. I feel a bit ridiculous declaring this book my new favourite in the series, having just said the same about the former one, but I needed that hug—just like Cam. 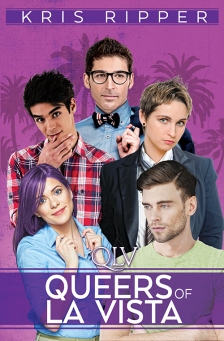 If you rolled all the words for love and sex and grace together into one, maybe you would have some sense of that night, of how timeless it was, and how eternal, as if it had been happening all along, as if it would continue happening until the end of the world. I had never experienced pleasure like that: liquid, hot, desperation with an edge sharp enough to cut like a knife. I had never felt so held, so contained, so taken care of.

I wouldn’t say I am much like Cam, but maybe that’s wrong. I’m not good at small talk and being in groups with a lot of people, and I have no problem with taking myself out of these kind of situations and hiding somewhere. There are parts of myself I don’t really believe in and I doubt that the perfect future is waiting for me, which all could sound like Cam and I are insecure, dysfunctional, unhappy people but we aren’t, because there is a lot more to us; something that other people recognise. They are our friends, our lovers; they love us, and we them.

I can relate very much to Cam’s character, but that’s not where it ends, because I can see my J and myself in Keith and Josh as well. They are an established couple and they share a deep bond and they complement and trust each other. I love the idea of involving another person in your relationship, include them in your love and come out stronger and more whole. This part of the story is incredibly well written, like, just. Fucking. Perfect. I get all warm and melting inside just thinking about it, and in my opinion the ending is wonderful and fits the characters and I believe they will walk into the future together from now on on.

As can be glimpsed from the blurb, the murderer of La Vista makes another appearance in this book and, geez, this is so so sooooo scary. At one point the foreboding was suddenly overwhelming:

All so perfectly mundane. That’s the genius of filmmakers like Hitchcock, of course. You start with a party, and it’s so mundane it seduces you a little. The guy sitting in silhouette in the foreground may be the hero, or he may be the villain. You aren’t always sure until the end.

Reading this still let’s my heart beat faster, but I survived and I’m glad it’s over, and I think the situation is satisfyingly resolved, too. The depiction of the guys’ survival and its aftermath seems very realistic to me and I really love the attention that is paid to it—even though it’s kinda not pretty and in parts excruciating to read.

I want to add some smallish things here before I come to the end: For fans of Kris Ripper, you will be delighted to see another favourite character, which I found to be very charming. I also definitely will watch some movies with Cary Grant, starting with Notorious this weekend. (OMG, I love how Cary Grant and cinematic stuff plays such an important role in this book.) I got that book reference (*jumps up and down*), which, really makes me smile so much. And Kris educates on the use of emojis, which is just hilarious :-O

This series, this book, is so much better than I had thought before I went into it. I mean, I was a fan of Kris’s writing before but still… Contemporary romance must fulfill certain criteria to be able to speak to me. I want to recognise myself in it and I want to read something fresh and new, and this series is achieving this for me, even more than I thought possible.

So I can’t recommend this series enough. Please check out our reviews of Gays of Our Lives, The Butch and the Beautiful, and The Queer and the Restless if you haven’t already.

Don’t miss this great series and definitely do not miss this instalment. It’s like a hug you shouldn’t resist.

You can purchase The Queer and the Restless from:
Riptide Publishing
Amazon (Not yet available)
iTunes
Kobo
Barnes & Noble
Smashwords