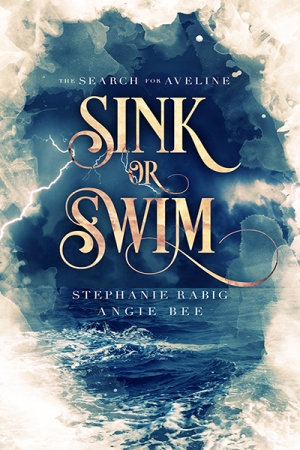 Captain Harriet “Harry” Roberts and the daring crew of The Sappho are not for the faint of heart. A ship of strays unlike any other, they’re not afraid to face whatever the world throws at them—be it mermaids, kidnappings, sirens, plague, clashes with their mortal enemy Captain Wrath Drew of The Charon, a handsome merman, or good old-fashioned love.

Lesbian pirates, yeah! This story is chock full of queer lady pirates (they’re sailing on The Sappho, after all), and all of the mythical sea creatures you can stand. My weakness for pirates and ladies carried me through most of this book. This is a solid read, but it’s missing that spark that would bring it over 3 stars.

The story is mostly a series of loosely connected vignettes that show how the crew of The Sappho first met and joined Captain Harry and her first mate Jo. It moves slowly, and as the title suggests, they’re looking for Aveline, Harry’s long-lost sister. However, they don’t do much to actually search for her. Events (basically everything listed in the book blurb) happen to the crew, they react, and then they sail on.

This book is apparently #1 in a planned series, but it feels more like the prequel. The book ends right when the story finally starts, which means that all of the potentially exciting things that could have happened during this book ended up as dangling plot threads left over for Book #2.

The story moves slowly and sometimes erratically, and what starts out as the book’s greatest strength ends up feeling a little like a let-down by the end. Straight, bi, lesbian, gay, or ace: it’s all here. The crew is super open and accepting of each other, which is great. There are moments, though, when it feels frustratingly like Bee and Rabig have a list and are checking off all possible pairings and orientations, adding new crew members to the story until they cover all their bases. The book, despite its length, only provides a fly-by overview of the many romantic pairings (there are a lot of characters in this book), making it impossible to get emotionally invested in any of them. All of the relationships have so much potential, but the only relationship that felt like it had a real spark was the developing romance between Harry and the merman Kai. But even then, the authors jump-cut from the pining stage, straight to the bedroom (or, the waterfall cave, as the case may be).

Speaking of Kai the merman, the sea monsters are my favorite part of this book. The Search for Aveline takes place in our world, approximately in the late 1800s, but with krakens, sirens, and mermaids added in. Outside of that, the world-building is super fuzzy and it’s not clear how the existence of real sea monsters in the world has altered history. Not much in the world seems noticeably different, which felt like a missed opportunity. On the other hand, the cultures of the mermaids and sirens were, for me, highlights of the story as we explored more about them. The sirens in particular are pretty bloodthirsty, so keep that in mind. Very early in the book, the crew finds a siren who has just had her tongue brutally removed by another siren.

Ultimately, The Search for Aveline is an enjoyable but slow-paced story with a few stand-out moments. If you’re looking for lots of high seas and pirate-y adventure, it’s not happening here. If you like books with diverse ensemble casts, found family, and strong female relationships, all set in a slightly fantastical world, then this might be something to check out.

Angie Bee is a tatterdemalion of a fangirl, writer, and pop culture pundit. Very fond of gothic horror, modern mythology updates, the supernatural, road trip narratives, noir, magical realism, found families, and the bizarre – all of which features heavily in her writing

When not writing, Stephanie Rabig can be found hanging out with her kids, making steampunk hats, or trying in vain to buy every pint of Ben & Jerry’s in the store. Loves include fairy tales, mythology, tea, chocolate, and The Avengers. Come say hi on Twitter at twitter.com/stephrabig, and keep an eye out for new projects at stephanierabig.weebly.com

You can purchase The Search for Aveline from:
Publisher

One thought on “Advanced Review by Natalie: The Search for Aveline, by Angie Bee and Stephanie Rabig”