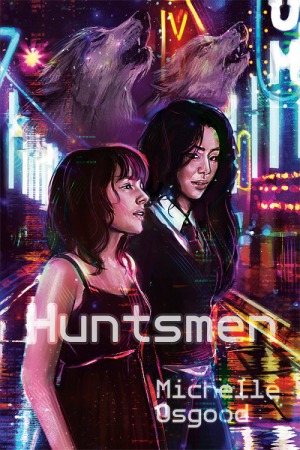 Months after saving Jamie and Deanna from crywolf, Kiara and her brother Cole have moved into the city. While clubbing one night, Kiara is stunned to see her ex, Taryn, on stage. But before she can react, Jamie notices a distinctive tattoo in the crowd: an axe rumored to be the mark of the Huntsmen, a group of werewolf-tracking humans. The girls need to leave immediately—and since Taryn is also a werewolf, they need to take her with them.

The Huntsmen are more than a myth, and they’re scouring the city for lone wolves just like Taryn. Until the General North American Assembly of Werewolves lends a plan of action, Kiara’s small pack is on lockdown in Nathan’s apartment building, where she and Taryn must face the differences that drove them apart. Furthermore, the longer the group waits, the more it seems the Huntsmen haven’t been acting entirely on their own.

Warning for:
Some Violence, Gore
Danger in a Nightclub

Having read the first book in this series, I was sold on Huntsmen as soon as I learned that tiny, adorable Kiara would feature as a female alpha. Shifter romance is not usually my thing but I have to admit I’m enjoying the series so far. Having said that, I think for the most part you can enjoy this book as a standalone without the benefit of book one, The Better To Kiss You With.

Huntsmen starts off with a bang in a packed club where Kiara locks eyes with Taryn or Ryn, her genderqueer ex-girlfriend from college as she gives a sultry performance during drag king night. Things heat up even more when the Huntsmen enter the scene and a violent clash outside the club sends Kiara and her friends – with Ryn in tow – into hiding. I made it a point to include a warning for the club scene because some might find parts of it triggering after the tragedy at the Pulse nightclub attack in Orlando. Minor Spoiler Alert: The sense of danger was palpable but no harm came to any of the innocent clubgoers.

The book was mostly fast-paced, however the few days that the group were sequestered felt like forever. It was great for filling in Kiara and Ryn’s backstory as well as getting the reader acquainted (or reacquainted) with Deanna, Jamie, Nathan and Cole, but I thought there was a lot of time spent in Kiara’s head. I liked the glimpse into her strong, stubborn and often arrogant personality which I thought suited the alpha-designate part of her. However, the days spent waiting around also highlighted her lack of decisiveness and showed that she still had a lot to learn before she was ready to take on the title of alpha full on.

There was a lot of confusion and infighting within the group but there was also some great moments of camaraderie amongst the makeshift pack. I really enjoyed their banter and thought the author did a great job letting each personality shine through. And I said it after book one and I’ll say it again: I need more Cole and Nathan in my life. But let’s not forget the delicious, simmering tension between Kiara and Ryn. This book did not disappoint in the heat factor. That’s a massive understatement, just FYI – it was blazing hot. And bonus points for rooftop sex (Vancouver, you lucky city, you). I also thought the author did a great job balancing the ghost of their past and their clashing philosophies of lone wolf versus pack with the challenges and sacrifices of the present-day conflict.

I thought the worldbuilding was minimal but in a good way. The author offered glimpses into their world through the occasional tidbit as the plot developed, rather than an info dump at the beginning or at every available turn. Overall, I was pretty satisfied with the way things worked out with the pack and especially between our two MCs and the way their relationship came full circle. There were some definite loose ends which I’m fairly confident will be resolved as the series progresses.  I wouldn’t say the book ended in a cliffhanger, but it definitely concluded with the next book in mind.

Michelle Osgood writes queer, feminist romance from her tiny apartment in Vancouver, BC. She loves stories in all mediums, especially those created by Shonda Rhimes, and dreams of one day owning a wine cellar to rival Olivia Pope’s. She is active in Vancouver’s poly and LGBTQ communities, never turns down a debate about pop culture, and is trying to learn how to cook. Her first novel, The Better to Kiss You With, was published by Interlude Press in 2016.