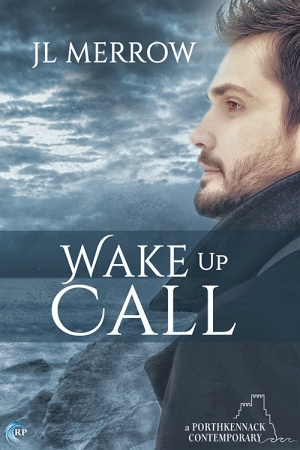 South London mechanic Devan Thompson has gone to Porthkennack to track down someone he’s been waiting all his life to know. But Dev’s distracted from his quest by Kyle, a broodingly handsome local of only a few months, who’s already got a reputation as an alcoholic because of his strange behaviour—including a habit of collapsing in the street.

Kyle Anthony fled to Porthkennack to escape from the ruins of his life. Still raging against his diagnosis of narcolepsy—a condition that’s cost him his job as a barrister, his lover, and all chance of normality—the last thing he wants is another relationship that’s doomed to fail. But Dev’s easy-going acceptance and adaptability, not to mention his good looks, have Kyle breaking all his self-imposed rules.

When disaster strikes Dev’s adored little sister, Kyle steps up to the plate, and Dev sees a side of his lover he wasn’t prepared for: competent, professional—and way out of Dev’s league. With one man determined that they don’t have a future, and the other fearing it, life after Porthkennack is starting to look bleak for both of them.

This has been a really hard book to review, largely in part because I had a really hard time reading it. I think I’m hit or miss with Merrow’s books. Sometimes? Oh, how they call to me. Others… not so much. This time around, I’m totally in the middle.

I mostly struggled with the dialogue/language this time around. Dev, and Kyle to a point, really speak a language I have a hard time with. British English… As an American, I really felt like Dev was speaking another language sometimes, and not English at all. There is also this thing that I don’t understand where he’d answer a question but add his own question at the end. But this would be a question that makes no sense to me at all and felt like extra words that are there for no reason. Example:

Um… how would he know? Even now I’m frustrated by the “didn’t she?”… It’s asking a question of Kyle that he would not know. I get it on a certain level, I do.  But to me, it really feels extra. So yeah, the vernacular really threw me and took me out of the story a lot.  Like, really a lot.

I also struggled with Dev, and his need to friend people, specifically Ceri. Her storyline really didn’t do anything for me or the story in general, and I honestly felt like I was missing the point of her presence at all. And don’t get me started on Dev and Kyle, and their reasons for being in Porthkennack… the main plots of the story. I had such difficulty staying interested and I ended up skimming a lot because I really wanted something to change.  What? I don’t even know. Maybe for every plot and subplot to either not mysteriously disappear, or for them to not be solved or resolved in a way that seemed so quick. It’s like this feeling of ALL THE ANGST ALL THE TIME. And then, meh, we’re done here.

This leads me to the pacing of the story. It drags on forever and I struggled to even finish it. I was tempted to DNF the book at 27% so the fact that I even finished is saying a lot.

I don’t need a book to have a super speedy pace and action all the time, or have it filled with copious amounts of sex. Not at all. But what I do need it to do is keep me interested. I wanted to fall in love with the main characters, the side characters, the story, and the locations… all of it.  Sadly, none of that happened. It wasn’t a good reading experience for me. It’s not a bad book. I know it isn’t. I think it just isn’t good for me. I don’t like feeling lost or confused, or tired and frustrated throughout an entire book.

Yet despite all of that… there were things I liked a little. Descriptions of the town, fantastic. Merrow painted the picture wonderfully. The ocean, the sand, the cliffs. Setting the scene was something that I felt really was spot on. I just wish I felt that way about all of it.

JL Merrow is that rare beast, an English person who refuses to drink tea. She read Natural Sciences at Cambridge, where she learned many things, chief amongst which was that she never wanted to see the inside of a lab ever again. Her one regret is that she never mastered the ability of punting one-handed whilst holding a glass of champagne.

She writes across genres, with a preference for contemporary gay romance and the paranormal, and is frequently accused of humour. Her novella Muscling Through was a 2013 EPIC Award finalist, and her novel Slam! won the 2013 Rainbow Award for Best LGBT Romantic Comedy. Her novel Relief Valve is a finalist in the 2015 EPIC Awards.

JL Merrow is a member of the UK GLBTQ Fiction Meet organising team.

You can purchase Wake Up Call from:
Publisher
Amazon
iTunes
Barnes and Noble

One thought on “Advanced Book Review by Kristie: Wake Up Call, by J.L. Merrow”