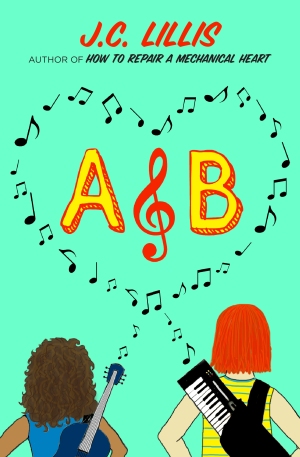 Eighteen-year-old Barrie Krumholtz is a super-tall optimist hell-bent on a single goal: securing a slot on Pop University, a reality show for singer-songwriters helmed by her #1 musical idol. When she humiliates herself on national TV and loses a spot in the finals to smug balladeer Ava Alvarez, the door to Barrie’s well-hidden dark side swings open. Never a quitter, she uses her bitter envy of Ava to shape a bold new artistic direction, and people love it. But when Ava ropes her into a secret collaboration, it sparks feelings neither girl expected—feelings that might threaten their creative identities and distract them from their professional goals. Can love and ambition live side by side? Is happiness an art-killer? They’ll figure it out with the help of a blue guitar named Fernando, a keyboard named Rosalinda, and a few new friends who feel like home.

(Rated R for Rivalry, Romance, and Really Neat Subplot featuring Brandon and Abel from How to Repair a Mechanical Heart.)

I wasn’t the biggest fan of American Idol and the other 638 shows like it, but I would have watched something like Pop University, or Pop U as it’s called. Maybe because this show had at least one out queer person on it (“a proud bisexual,” says Barrie/Barbara). I dunno.

But either way I loved this book. Lillis wrote it in a way that made sense, even when she had Barrie break the 4th wall and reach out to ‘you,’ the reader. A&B didn’t feel like a topical coming-of-age novel; it even felt different than other queer novels. For one thing, Barrie’s already out, which helps. Also, even though she makes some not so smart decisions as the book begins, Barrie seems older than her assumed age.

In a way, I also loved how the secondary plot between Barrie and her ma played out. No spoilers, because you should read this book, but it was refreshing.

Like many queer teens, Barrie also finds her own kind of family – one from a previous book by Lillis (How to Repair a Mechanical Heart, which I need to read!). Abel and Brandon are lovely.

But my favorite part of the book was Barrie and Ava – or should I say, A&B. The story of the two enemies turned something else made me so happy. Also, no spoilers again, but this: there’s a sex scene in the book written in the form of one of Barrie’s infamous lists. It was so nerdy and wonderful that it worked. And it was one of my favorites.

While writing this review, I came across this quote from Lillis on her website: “In my head, there’s a movie version of HTRAMH.”

Please tell me there’s a movie version of A&B there too. Or at least a sequel?

J.C. Lillis lives in Baltimore with her patient family and a ragtag band of tropical fish, some of which will be dead by the time you read this. She loves thrift store art, dollhouses, koi ponds, retrofuturism, and peanut butter and banana sandwiches. She hates writing bios.

You can find her online at: http://www.jclillis.com/

You can purchase A&B from:
Amazon
Barnes & Noble

I received a copy of this novel in exchange for a fair and honest review.