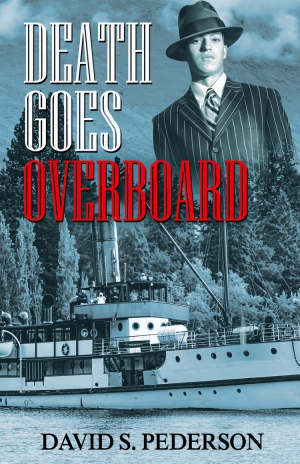 Gregor Slavinsky went overboard. Or did he? He was murdered. Or was he? It’s up to Detective Heath Barrington and his partner, police officer Alan Keyes, to find out as they search for clues and a missing twenty-five thousand dollars aboard an old lake steamer and throughout 1947 Milwaukee, Wisconsin.

They are up against gangsters, con artists, and a very seductive Grant Riker, a fellow policeman who could come between Heath and Alan, upsetting their romance.

The three of them race the clock to find the truth amidst lies, secrets, and possible scandal, while riding the waves of a potential love triangle.

So, this was my first book by David S. Pederson and the second book in the Detective Heath Barrington series. While I wouldn’t describe this as a standalone, I think you can go into this one without having read the first book, as it seems each mystery is resolved by the end of the book – or at least this one was anyway.

Written in first person, the author relies on telling, rather than showing, the motivations of our MC, Heath Barrington. In a way, this actually lends itself to the time period in which the story takes place (1947, Milwaukee), because it reminded me of movies from that time where people – especially men – seemed to spend far less time navel-gazing and more time on practical matters and just getting shit done. And if Heath is nothing else, he’s very practical.

Death Goes Overboard is pretty much a straightforward mystery with a solid plot and good pacing. And if that’s all you’re looking for in this book, you won’t be disappointed. But if you’re hoping there will be a little romance thrown in, you may end being disappointed. Aside from a little footsie under the table at a cafeteria, there’s barely more than look shared between Detective Barrington and his new lover officer, Alan Keyes. Mind you, this is 1947 and even being seen sharing a significant look could cause a world of hurt for the men, both personally and professionally.

And that, it seems, is a big focal point in this book. Everyone from Heath’s aunt to his boss seem to be telling Heath the same thing – it just isn’t normal for a man in his 30’s to be unmarried. In fact, it’s starting to become a cause for discussion, a fact that’s confirmed when Heath is propositioned by another officer he meets during the course of the investigation.

“Surely you’ve been around the block a time or two, at least from what I’ve heard.”

“Where did you hear that?” I asked, bristling

“It does to me. The same fellows you mentioned earlier?”

“Just around. What’s the big deal? I’m discrete, and I know you are.”

Amid all this is a pretty good mystery that had me guessing, at least until the end of the boat trip, about who the murderer was and how they were going to get caught. There’s some insight into police investigations of the day, and while this could have been slightly plodding, the author made it quite interesting with the addition of some great side characters. In fact, I thought the author did a great job here with almost all of the characters, including George, the enforcer with the heart of a poet. The interaction between him and Heath on the boat trip was kind of a lovely interlude in a book that doesn’t really have many overtly emotional moments.

I think if you’re looking for more of a classical mystery novel, you’ll quite enjoy this book and I wouldn’t hesitate to recommend it. I would suggest reading the first one too, although what order you decide to read this series in is entirely up to you. However, if you enjoy a healthy dose of romance with your mysteries (a la Josh Lanyon, for example) this probably isn’t the book for you.

David S. Pederson was born in Leadville, Colorado, where his father was a miner. Soon after, the family relocated to Wisconsin, where David grew up, attending high school and university, majoring in business and creative writing. Landing a job in retail, he found himself relocating to New York, Massachusetts, and eventually back to Wisconsin, where he currently lives with his longtime partner, and works in the furniture and decorating business.

He has written many short stories and poetry and is passionate about mysteries, old movies, and crime novels. When not reading, writing, or working in the furniture business, David also enjoys working out and studying classic ocean liners, floor plans, and historic homes.