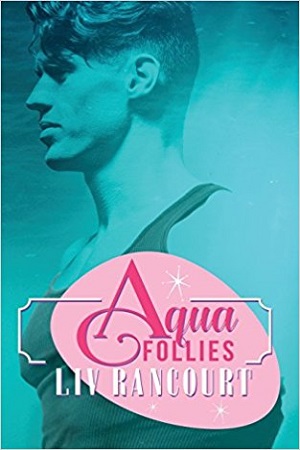 Russell tells himself he’ll marry Susie because it’s the right thing to do. His summer job coaching her water ballet team will give him plenty of opportunity to give her a ring. But on the team’s trip to the annual Aqua Follies, the joyful glide of a trumpet player’s solo hits Russell like a torpedo, blowing apart his carefully constructed plans.

From the orchestra pit, Skip watches Poseidon’s younger brother stalk along the pool deck. It never hurts to smile at a man, because good things might happen. Once the last note has been played, Skip gives it a shot.

The tenuous connection forged by a simple smile leads to events that dismantle both their lives. Has the damage been done, or can they pick up the pieces together?

Wow. Having finished Aqua Follies, I want to start it all over again. The attraction between Skip and Russell is intense, and the early yearning between them hooked me right away. I had to see this to the end.

The setting is vividly realized, and as someone who has frequently visited in Seattle, the descriptions of downtown Seattle in the 1950s really added a lot to my enjoyment of the book. Downtown Seattle has changed a lot in character, but the streets are the same. (However, I don’t think Seattle gets as miserably hot and muggy in the summer as the book describes…but maybe that’s also changed in the intervening decades.) This book made the era’s charms and follies come alive. The amount of research that went into this book must have been immense, but it truly paid off in the character’s voices and their perspectives.

Music plays such an important role in this book, adding extra layers to both the characters and their relationship. I swear I could hear the trumpet as Skip was playing it sometimes, which sent chills down my spine in a few scenes.

From the set-up of the story, Susie could easily have been presented as an obstacle or an enemy, but this doesn’t happen at all, which I truly appreciated. She has her own fully formed agenda, and Russell respects that. Speaking of Russell, the only reason I downgraded this a half-star is that there are only so many times that a character can be an ass, promptly realize he was an ass and apologize, and then do the same thing again before it gets a little stale. Russell blows hot and cold throughout the book which, although understandable given his deeply closeted nature and internalized homophobia, felt unevenly applied. There never really felt like there was a turning point for Russell either, where he overcame his shame at being gay. He’s just suddenly on board with having a relationship with Skip. Despite his hot-and-cold tendencies, Russell is a good man and a good friend, and it’s clear why Skip falls for him.

I enjoyed this one a lot. There is era-appropriate homophobia, so be warned, and it ends on what I think is more of a HFN, but now I want to hunt down all the songs mentioned in the book. This one is going to stay in my head for awhile.

Liv Rancourt writes romance: m/f, m/m, and v/h, where the h is for human and the v is for vampire…or sometimes demon. She writes funny. She doesn’t write angst. When not writing, Liv takes care of tiny premature babies or teenagers, depending on whether she’s at home or at work. Her husband is a soul of patience, her dog is the cutest thing evah(!), and she’s up to three ferrets.

You can purchase Aqua Follies from:
Amazon