Today we’re highlighting new author Amanda Foody, whose recent release, Daughter of the Burning City, is a darkly whimsical fantasy set in a traveling circus, and who has the talent to create realistic illusions of people… illusions which are somehow being murdered.

I sat down with Amanda at San Diego Comic Con, to ask her all about this incredible book, and about what’s coming up next for her!

Where did the idea for Daughter of the Burning City come from? Were there books or movies that you drew inspiration from? 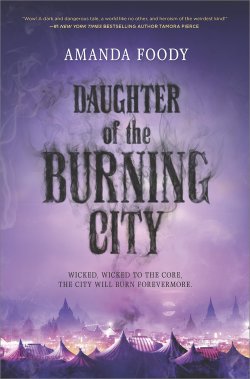 Honestly, Daughter of the Burning City has so few inspirational pieces. It started as an exercise in my writing class, because my professor usually gave us 10 minutes or so to write what we wanted. I knew we had a unit coming up on Young Adult books. I already had an agent by that time, so I was thinking I’d write something weird that everyone thinks is cool. The first few pages of Daughter that I wrote that day are pretty much the same in the final book.

I came back to it about a year later, knowing nothing about the plot or where it was going, just that it was a carnival setting and the main character had no eyes.

Daughter deals with some pretty serious themes. There’s disability, sexuality, death… how do you balance those themes without making the novel feel too heavy?

I feel like when you pitch Daughter, it’s a really disturbing book! But it’s like those pitches of Disney movies, where they take out all of the context of movie and give you one line? Like, “widower loses his disabled son and has to travel across the world with a mentally disabled woman to find him”? And that’s Finding Nemo.

So you look at Daughter, and it has a girl with a facial disfiguration, who feels isolated within a city of isolated people. And she has to create her entire family of imaginary friends only to have them murdered one by one.

But I talk about things pretty honestly. Like with the sexuality in Daughter, I have no qualms about talking about consent and pleasure. And I think when you’re trying to tackle any topic like that, you have to give it what it deserves.

And you need to balance it with lots of fun! The character and dialogue offers a lot of one-liners that are funny, and the setting is colorful and whimsical.

The character of Luca is ace-spectrum, which is awesome to read! Was that something you went into consciously, or was it something that came to be as the character evolved?

As I was writing Luca, there were many reasons—many of which affect the plot, so no spoilers!—that it became not only me wanting to explore his sexuality, but also it became important to his character and Sorina’s character. So I went in consciously wanting that rep in the story.

And you have a lesbian secondary character, plus the main character, Sorina, is bisexual, right?

In terms of Sorina’s bisexuality, there were a lot of edits made. Originally it was pretty subtle, and then we went in and added scenes where I made it very clear!

And Nicoleta is a lesbian, and she’s one of my favorite characters that I’ve ever written. Over the course of writing the book, she kept asking for a larger role. Initially she starts out as the morose older sister, always nagging Sorina… and Sorina has almost made her that way! I think her arc over the course of the story is really satisfying, and her sexuality felt… I guess it felt right to me. It’s not important until it is, and it doesn’t change anything about her, but it’s part of her.

Your second novel, Ace of Shades, is out next spring. Can you talk a little about it? 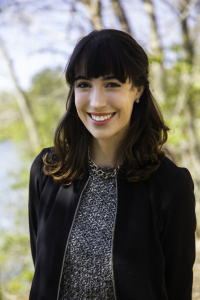 I’ve been working on Ace since I was 17. It’s gone through a lot of changes in its life. But the pitch for the story is Six of Crows meets Spirited Away.

It’s set in the city of Sin, which is like Paris meets Atlantic City boardwalk, and is about a street gang. There are casino families who handle the gambling and narcotics in the city, and the street gangs run the other illegal stuff.

It’s been a challenge. People kept telling me to start small, instead of writing a hugely complex fantasy novel. But I really feel like this book taught me how to write.

If you could write in any genre that you haven’t written in yet, where would you go?

I’d probably move into the adult crossover side. But I can’t imagine not writing fantasy. I think it’d be interesting to try adult fantasy, though, because I’d get to write longer and sexier books!

What’s the last book you read that just left you floored?

I’m currently reading The Gentleman’s Guide to Vice and Virtue. It’s a delight! Everything about it is so fun. I don’t even want to finish it because I’m so in love with the book.

And last question… looking waaaaay out into the future, do you have any fun projects that you can hint at?

I always have about twenty projects in my head. I’m an ambitious outliner. But then I set it aside until I have time, because otherwise I’ll keep distracting myself with something new and shiny. But I’m noticing that I’m developing a strong interest in one aspect of the fantasy genre, and that’s fantasy worlds set in modern eras—not contemporary, but 20th century. Ace of Shades is set pre-WWI, not quite the 1920s.

So I might have some other fantasy worlds set in 20th century settings!

Awesome! Thank you so much for talking with me today, it was a pleasure!

Daughter of the Burning City is out now… check it out below!

A darkly irresistible new fantasy set in the infamous Gomorrah Festival, a traveling carnival of debauchery that caters to the strangest of dreams and desires.

Sixteen-year-old Sorina has spent most of her life within the smoldering borders of the Gomorrah Festival. Yet even among the many unusual members of the traveling circus-city, Sorina stands apart as the only illusion-worker born in hundreds of years. This rare talent allows her to create illusions that others can see, feel and touch, with personalities all their own. Her creations are her family, and together they make up the cast of the Festival’s Freak Show.

But no matter how lifelike they may seem, her illusions are still just that—illusions, and not truly real. Or so she always believed…until one of them is murdered.

Desperate to protect her family, Sorina must track down the culprit and determine how they killed a person who doesn’t actually exist. Her search for answers leads her to the self-proclaimed gossip-worker Luca, and their investigation sends them through a haze of political turmoil and forbidden romance, and into the most sinister corners of the Festival. But as the killer continues murdering Sorina’s illusions one by one, she must unravel the horrifying truth before all of her loved ones disappear.

You can purchase Daughter of the Burning City from:
Publisher
Amazon
iTunes
Barnes & Noble
Target

Or add it on Goodreads

Amanda Foody has always considered imagination to be our best attempt at magic. After spending her childhood longing to attend Hogwarts, she now loves to write about immersive settings and characters grappling with insurmountable destinies. She holds a Masters in Accountancy from Villanova University, and a Bachelors of Arts in English Literature from the College of William and Mary. Currently, she works as a tax accountant in Philadelphia, PA, surrounded by her many siblings and many books.

DAUGHTER OF THE BURNING CITY, her first novel, will be published by Harlequin TEEN on July 25, 2017. Her second, ACE OF SHADES, will follow in April 2018.

2 thoughts on “Women in Queer SFF: Interview with Amanda Foody!”