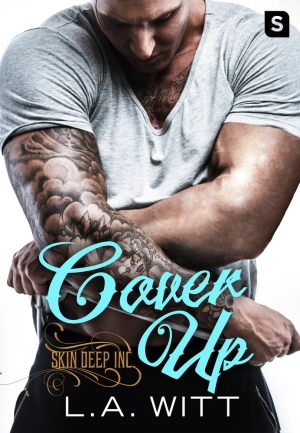 After ten years of blissful marriage, Navy Pilot Nate Chandler is divorcing his cheating husband. Single for the first time in years, Nate is numb to all emotion and kisses any chance of another relationship goodbye.

Not only is Nate struggling to get through this divorce, but his body is branded with a permanent reminder of his failed marriage: a matching tattoo with his ex. Searching for a place to cover up his old tattoo, Nate finds himself at the Skin Deep, Inc., where he meets the young and charming cover-up tattoo apprentice, Lucas Brandt.

From just flirty glances to steamy hot encounters, Nate and Lucas dive headfirst into a fling of hookups. But worried that he’ll forever be Nate’s “cover up” rebound relationship, Lucas fears that their love won’t be anything more than just skin deep. What was once just a casual attraction, Lucas now hopes to turn into a real relationship. But will he be able to convince the still tender-hearted Nate to fall in love again?

Third installment of L.A. Witt’s Skin Deep romance series, COVER UP is a story of passion, pleasure, and happily ever after.

This was my first foray into the Skin Deep, Inc. series and it was pretty much what I expected. A fun and sexy read with likeable characters and a decent plot. It didn’t sweep me off my feet but it was a great way to pass the time during a lazy weekend.

First off, the sex was off the charts which is no surprise if you’re familiar with the author’s works. Nate and Lucas had sizzling chemistry and I loved that it was somehow both easygoing and hot as hell. If you’re looking for some serious heat in your next read, this is it. I mean, the book might as well have been titled Sex instead of Cover Up because Nate sure as hell got the ultimate cover up to forget his failed marriage – in the form of a fuckton of mindblowing sex courtesy of Lucas.

I liked the way they both steadily but surely got attached and even though they didn’t give voice to their feelings, they didn’t fight it either. It just felt very realistic and natural for them at that particular point in their lives . However, the fact that Nate flat-out refused to talk or even think about his divorce lent a rebound vibe to their relationship despite the strength of his growing feelings.

I also liked that although there was some age gap, it wasn’t really a huge factor. Lucas’s youthful looks made him appear younger than his 27 years, and even though he was far from settled, I liked how hard he was hustling to get his shit in order. Between the two heroes, I definitely liked Lucas’ character the most – he was comfortable in his own skin and that really showed in his playful nature and confidence in bed. I was hoping that some of his positive attitude about his own failed marriages would help Nate come to terms with his ongoing divorce but alas, that was not the case.

I thought Nate’s avoidance tactics surrounding his divorce got really old, especially when there appeared to be a major breakthrough during a pivotal moment in their relationship… but then he went right back to clamming up. His character voice definitely got a bit repetitive in that regard. In addition, some of his thought bubbles came off as super sappy to the point of cheesiness whenever he was with Lucas. He was a bit all over the place for me which I guess is not surprising considering the circumstances.

Cover Up ended on a solid HFN, which is fair as I think anything more would have seemed unrealistic and unsustainable. As it was, I thought the conflict resolution was really rushed but the epilogue managed to smooth things out somewhat. This book is a standalone but characters from the previous books in the series do feature prominently throughout Nate and Lucas’ story. I just might check them out the next time I’m in the mood for more sexy fluff.

L.A. Witt is an abnormal M/M romance writer who has finally been released from the purgatorial corn maze of Omaha, Nebraska, and now spends her time on the southwestern coast of Spain. In between wondering how she didn’t lose her mind in Omaha, she explores the country with her husband, several clairvoyant hamsters, and an ever-growing herd of rabid plot bunnies.

She also has substantially more time on her hands these days, as she has recruited a small army of mercenaries to search South America for her nemesis, romance author Lauren Gallagher, but don’t tell Lauren. And definitely don’t tell Lori A. Witt or Ann Gallagher. Neither of those twits can keep their mouths shut…

You can purchase Cover Up from:

One thought on “Advance Review by Rafa: Cover Up, by L.A. Witt”