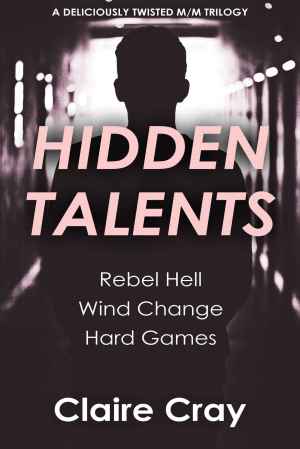 A trickster telepath running for his life. A yakuza sex-hustler trying to go straight. A surly young torture survivor who just wants to eat some pizza. These are just a few of the beautiful weirdos called Talents. Born with extraordinary abilities, these outsiders walk the razor-sharp edges of sex, power and madness — while trying to stay ahead of the sinister global corporation that would enslave them for profit.

But as the threat level rises, rogue Talents are forced together in unlikely ways. For Jin, that means breaking away from his team of psychic mercenaries to forge new alliances — and discovering Ken, a strange young Talent whose icy looks hold a mysterious charisma. In the midst of war, all Jin can think about is winning Ken. What neither knows is that those two fights are one and the same.

Can good guys and bad boys unite to defeat a common enemy? Or will the drama kill them first?

The first thing you need to know is that this book was a trip. I had so much fun reading this, never knowing how it was going to end – even though it pretty much “tells’ you at the beginning – that I was kept enthralled throughout. Additionally, I was on tenterhooks for pretty much the last third of the story and raced through it as quickly as I could.

The second thing you need to know is that the Kindle version is over 900 pages of awesome.

Wait! Don’t panic! It will be the quickest 900 + pages you have ever read. I mean, that’s if you actually *want* to read a story about a bunch of crazysexycool psychics overthrowing an evil mastermind (you totally do!).

The Klaus Gadamer Academy, aka The KGA, has made its name by capturing talents (people with psychic abilities) all over the world, submitting them to brutal initiations and brainwashing, and selling their skills to anyone willing to pay outrageous sums of money to manipulate governments, elite corporations and world leaders.

When a recent coup sees a particularly cruel and ruthless empath take control of The KGA, Jackson Gadamer – grandson of the founder – quietly makes arrangements to bring his long-time nemesis down by sending out Jin, his most trusted and loyal telepath, to infiltrate a cell of Talents who have been living out of the KGA’s reach. According to Jackson’s visions, this cell will play a vital role in carrying out his plan to grab control of the KGA and he’ll stop at nothing, including manipulating anyone and everyone, to ensure that it happens. Even if it means losing Jin in the process.

The story is told from multiple viewpoints, which can seem a little confusing at first, especially when you’re trying to get to know all the players, but the focus is mostly on the telepath Jin, and Ken, a young man the cell has recently taken under their wing when he showed up on their doorstep, bruised, bloodied and barely able to talk.

Each person in the group brings their own unique abilities to the table that allow them to function as a cohesive unit. The only exception to this rule is Ken. While Jin can generally get a read on most of the others, Ken remains a complete enigma. A total blank. Not even Jin’s extensive telepathic skills can get into Ken’s head, a fact that Jin finds both puzzling and a relief as he starts to seek out Ken to quiet the constant ‘chatter’ he picks up from the people around him. But as Jin starts to become uncharacteristically obsessed with Ken, he starts to question his role in Jackson’s mission. Soon he has to decide where his loyalties lie and he wonders if he has the power to change a prophecy that will overthrow an institution that tortured him, even if it results in losing Ken forever.

Previously published as a trilogy, it’s probably easier to think of this book as having three parts: The first is the introduction of the cast of characters and the requisite world building. It takes a bit to get into the story but once you do, it starts to take off. The second part starts to go deeper into the story and the characters, and this is where I really started having trouble putting the book down. It’s where you question motivations you previously thought were clear and begin to wonder how it will end. The third part is the thrill ride that leads to a phenomenal conclusion. Things happen as they were predicted…but not exactly. It’s a seriously fantastic end to a really great book.

I know that long books are off-putting to some people, but personally I enjoy them. The table of contents breaks the book into thirds, so if it’s easier to think of this as a trilogy, that you can read bit by bit, then by all means do whatever it takes to get you reading. Just don’t be intimidated by the length. This is a roller coaster ride of a story that you really shouldn’t miss.

I was born and raised in the wet green backwoods of the Pacific Northwest, an area soaked in ghosts and legends, ocean mythology and Native American folklore. Now I live in the big city, where I’m a copywriter by day and fiction freak by night.

As Claire Cray, I mainly write M/M Romance. Why? The simple answer is that I like boners. A more complex answer would touch on my queerness, gender nonconformity and lifelong obsession with Romance subgenres that undermine conventional assumptions of what people want.

I hope you enjoy my dream world of spooky forests, psychics and vampires, hookers and hustlers, and devious tricksters from around the cosmos. And if you feel like saying hello, reach out. I love talking to strangers.

You can purchase Hidden Talents from:

I purchased this book from Amazon. This review is strictly my unbiased opinion only.