2017 is drawing to a close, but there are still tons of great books to read before we ring in 2018! So it’s time again for our Top of the Stack!

The weather is growing chilly and grey (unless you’re in the Southern hemisphere, you lucky ducks), and it’s the perfect time to curl up with a good book and a warm drink. So here are our most anticipated reads of December… go forth and add to your TBRs! 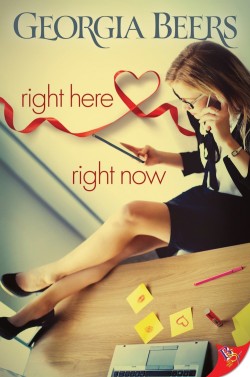 Caissa: RIGHT HERE RIGHT NOW by Georgia Beers looks fun. It is also too close to my life story lol. I’m very specific about planning but also willing to sort of give that up for a special someone…

Accountant and financial advisor Lacey Chamberlain doesn’t consider herself a control freak. She’s merely a planner—orderly, neat, and content in her tidy little life. When a marketing firm moves into the empty office next door, the loud-music-playing, stinky-food-ordering, kickball-in-the-hall staff make Lacey crazy.

Marketing expert Alicia Wright is spontaneous, flies by the seat of her pants, and lives in the moment—all the things Lacey is not. She’s also gorgeous, thoughtful, and seems determined to make Lacey like her.

They say opposites attract, but for how long? And is that really a good idea?

DMac: I was poking around Amazon and found Black on Both Sides: A Racial History of Trans Identity by C. Riley Snorton.

1. I love history books.
2. Intersectionality is so important and I’m working on reading more books to help me improve my understanding of other people’s experiences.
3. It just looks interesting.

The story of Christine Jorgensen, America’s first prominent transsexual, famously narrated trans embodiment in the postwar era. Her celebrity, however, has obscured other mid-century trans narratives—ones lived by African Americans such as Lucy Hicks Anderson and James McHarris. Their erasure from trans history masks the profound ways race has figured prominently in the construction and representation of transgender subjects. In Black on Both Sides, C. Riley Snorton identifies multiple intersections between blackness and transness from the mid-nineteenth century to present-day anti-black and anti-trans legislation and violence.

Drawing on a deep and varied archive of materials—early sexological texts, fugitive slave narratives, Afro-modernist literature, sensationalist journalism, Hollywood films—Snorton attends to how slavery and the production of racialized gender provided the foundations for an understanding of gender as mutable. In tracing the twinned genealogies of blackness and transness, Snorton follows multiple trajectories, from the medical experiments conducted on enslaved black women by J. Marion Sims, the “father of American gynecology,” to the negation of blackness that makes transnormativity possible.

Revealing instances of personal sovereignty among blacks living in the antebellum North that were mapped in terms of “cross dressing” and canonical black literary works that express black men’s access to the “female within,” Black on Both Sides concludes with a reading of the fate of Phillip DeVine, who was murdered alongside Brandon Teena in 1993, a fact omitted from the film Boys Don’t Cry out of narrative convenience. Reconstructing these theoretical and historical trajectories furthers our imaginative capacities to conceive more livable black and trans worlds.

Rafa: I’m really looking forward to the next Cat Sebastian book. I mean, she had me at “stern sea captain” but I recently heard it described as the M/M “Sound of Music” and I’m. so. there!

Gillian also lists this one as an Honorable Mention!

Some of Ben Sedgwick’s favorite things:

After an unconventional upbringing, Ben is perfectly content with the quiet, predictable life of a country vicar, free of strife or turmoil. When he’s asked to look after an absent naval captain’s three wild children, he reluctantly agrees, but instantly falls for the hellions. And when their stern but gloriously handsome father arrives, Ben is tempted in ways that make him doubt everything.

Some of Phillip Dacre’s favorite things:

Phillip can’t wait to leave England’s shores and be back on his ship, away from the grief that haunts him. But his children have driven off a succession of governesses and tutors and he must set things right. The unexpected presence of the cheerful, adorable vicar sets his world on its head and now he can’t seem to live without Ben’s winning smiles or devastating kisses.

In the midst of runaway children, a plot to blackmail Ben’s family, and torturous nights of pleasure, Ben and Phillip must decide if a safe life is worth losing the one thing that makes them come alive.

How to Blow It with a Billionaire (Arden St. Ives #2), by Alexis Hall
Publisher: Forever Yours
Release Date: December 12, 2017

Gillian: I’m most looking forward to How To Blow It With a Billionaire by Alexis Hall. This is the second book in the three book series and the title suggests that poor Arden is in for a bumpy ride. I know a few people who are skipping this until book three is released, but I’m all in. Caspian better do right by Ardy, though. I know it feels like he’s going to fuck everything up first, but I think Ardy will come through this stronger, smarter and ready to be Caspian’s equal in every way.

Mel: Most anticipated book of December for me as well, but it comes with a dose of apprehension. The first book gutted me like I would never have expected because Arden is a lot like me in some aspects that hit very close to home. Tears were involved, feelings, and a lot of hope, so let’s see what this next installment will do to me

Once upon a time there was a totally ordinary boy who fell for a cold, beautiful prince. Only it’s not a fairy tale, it’s my life. The prince is a billionaire called Caspian Hart. And we’re trying super hard to live happily ever after.

Rafa: A Japanese-American artist MC? An established couple in an open relationship? Late 90’s Seattle arts scene? Sweeping cast of non-homogenous Asian Americans and other POC? Just Like Honey is a thoughtful and unapologetic love letter to Seattle and its Asian American community and I am so here for all of this.  [It’s a standalone but the books and characters are connected.]

Can He Paint His Muse into 36 Views of Seattle?

Artist Ryan Ikeda’s domestic bliss shatters after an invitation to join a career-launching gallery show in 1990s Seattle. His artistic uncertainty and secret desires, dangerous as turpentine and flame, threaten to torch his bond with Ben, his handsome boyfriend and muse.

Suddenly, instability rocks every aspect of Ryan’s life: his grandmother’s sinking health, his friends moving on to new jobs, even his apartment is endangered. Worst of all, Ben’s work demands more time away from home, the overload of changes jeopardizing the stability of their open relationship.

Ryan’s long-time friends advise him to jump headlong in to the colorful Seattle art scene. However, Ryan’s deep examination of his creative needs outline new demands for his life with Ben. Striving for both balance and success, Ryan faces the greatest risks of his personal and professional life.

Just Like Honey peeks inside working artists’ studios, cruises the 1990s Seattle bar scene, and eavesdrops on artists gossiping about their competitors at hot gallery shows, while Ryan and Ben explore the communication and tenderness required for a deep, open relationship.

Kristie: I have all kinds of excitment for “Kairos” by Mary Calmes. I have a bit of what I like to call “Mary Madness” or “Maddness for Mary”. I love her books, what can I say? A friends to lovers, work partners, and roomates story, Kairos looks to tick a lot of my boxes.

Sometimes the best day of your life is the one you never saw coming.

Joe Cohen has devoted the past two years of his life to one thing: the care and feeding of Kade Bosa. His partner in their PI business, roommate, and best friend, Kade is everything to Joe, even if their relationship falls short of what Joe desires most. But he won’t push. Kade has suffered a rough road, and Joe’s pretty sure he’s the only thing holding Kade together.

Estranged from his own family, Joe knows the value of desperately holding on to someone dear, but he never expected his present and past to collide just as Kade’s is doing the same. Now they’ve stumbled across evidence that could change their lives: the impact of Kade’s tragic past, their job partnership, and any future Joe might allow himself to wish for…. 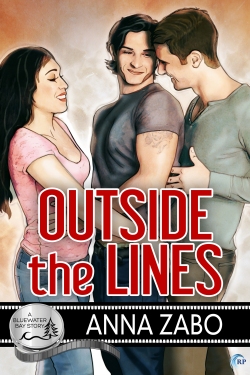 El: I’m ridiculously excited for “Outside the Lines” by Anna Zabo. Anna’s a good friend of mine, but this penultimate book in the “Bluewater Bay” universe just sounds *incredible*! I love poly romances, and I think Anna’s story is going to show readers a really unique and beautiful relationship between three people– a woman, a bisexual man, and a gay man. Plus, the BWB books are always just a blast to read. I think this book will appeal to readers across the romance genre, and Anna always writes the steamiest sex scenes so you know it’s gonna be HOT!

Miniature artist Ian Meyers has one week to rebuild his damaged set. Needing help, he goes to End o’ Earth, the local comic and gaming shop. Owner Simon Derry pushes all of Ian’s buttons, and he also has steady hands and the skills Ian needs.

Ian’s all in, and it’s fantastic working with Simon to piece together his set and then take each other apart at night. His friendship with Lydia grows too. The only problem is, the more time he spends with Simon, the more he wants everything Simon already has with Lydia: A house. A cat. A commitment. So Ian runs, and shatters the trust he has with them both—right when they need him the most. Piecing their relationships back together might prove harder than a smashed set. 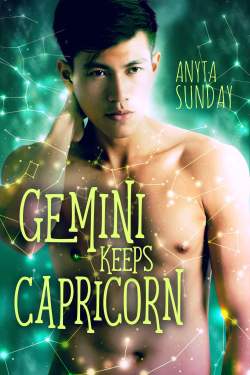 Pixie: I literally only have one book on my TBR for December and it’s Gemini Keeps Capricorn!

Rafa: I’m excited for this one too, having loved the previous two in the series. Whether it’s tortured or playful, she does exquisite slow burn, and this one is opposites attract to boot!

Sometimes, one stubborn Capricorn is all it takes… to drive Wesley Hidaka to crazy, flirtatious lengths.

Wesley loves annoying his RA, Lloyd Reynolds. He just can’t help it. Lloyd is focused, decisive, grounded. He has this amusing ability to follow rules.
Of course Wesley wants Lloyd to break one… or three hundred.

Sometimes, one smirking Gemini is all it takes… to have Lloyd laying down the law and marching Wesley straight back to his dorm room.

It doesn’t stop Wesley teasing again. And again. And again…
But damn. Lloyd doesn’t crack easily. He’s full of principles. He’s unshakable.
He’s the perfect friend to have when Wesley needs help. Like with his truant brother and his old high school principal.

Sometimes, one little lie is all it takes… to find Wesley fake-engaged to his off-limits RA.

What can he say? It seemed like a good idea at the time…

What are you excited to read in December?