By now, we’ve all heard about the going-ons at the 75th Golden Globes earlier this week. It was a night of protests, both silent and very, very vocal. It was a platform for women to call out the men of Hollywood… and yes, in typical award show fashion, there was plenty of bad humor. 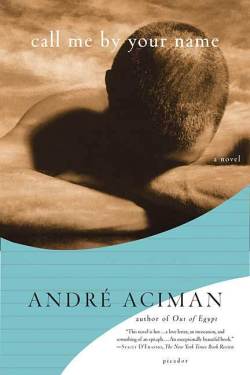 But I want to take a moment to talk not about the celebrities wearing black, but instead about a gorgeous queer book that became a gorgeous queer movie… a movie that was nominated for Best Motion Picture – Drama.

That book (and movie) is, of course, Call Me By Your Name, written by André Aciman and adapted to screen by James Ivory and Luca Guadagnino.

But I want to take a minute to talk about this movie, and how amazing it is to see this queer story nominated for one of the biggest awards in Hollywood.

The best word for Call Me By Your Name is ‘intimate’. There were so many times where I felt like I was inside the movie, in Italy, watching a real relationship unfold before my eyes. It’s a close-up film, where everything from the emotions to the landscape is front and center, drawing you in. Armie Hammer is a phenomenal actor, though I think Timothee Chalamet (who played Elio) really stole the show.

(Also, that scene with the peach was… something.)

One part of the movie I particularly appreciated was Elio’s father, who was understanding and full of wisdom for his son and for the movie viewers:

How you live your life is your business, just remember, our hearts and our bodies are given to us only once. And before you know it, your heart is worn out, and, as for your body, there comes a point when no one looks at it, much less wants to come near it. Right now, there’s sorrow, pain. Don’t kill it and with it the joy you’ve felt.

Taking a step back, director Luca Guadagnino said something I found interesting about this movie: “I like to think it’s a film for the transmission of knowledge and hope that people of different generations come to see the film together.”

I’m torn about this statement. Call Me By Your Name was shaped to be an emissary of sorts… an ambassador to people to show them an intimate queer relationship and the coming of age of a young gay man. That’s a goal I can absolutely get behind, because I strongly believe in telling queer stories on an elevated platform. Bringing in a big-name actor like Armie Hammer certainly helps with this.

But I also feel a little betrayed. This is a queer story written by a straight man, acted by straight men. It’s a story that aims to convey what it’s like to be a young gay man in the 1980s, but from a heterosexual perspective. Can straight people write and act in queer stories? Absolutely. And is this a great novel and a lovely film adaptation about a gay relationship? Yes. But that doesn’t mean I can’t wish a queer own-voice had been elevated instead.

Edit: I was informed after that both the director and the writer of this movie are openly gay! I’ve edited the above post to reflect that only the book’s author and the actors are straight, and I sincerely apologize for making assumptions and assigning an incorrect sexual identity to these two men. Admittedly this does make me feel better about the movie, though I still hold reservations about the decision to adapt and elevate a book written by a straight man, rather than an own-voices work. But I maintain that the movie is a work of art, and am pleased to learn that Director Luca Guadagnino and Writer James Ivory were able to provide input from a queer perspective.

I did find the Jewish aspects to be very well done. As a queer Jewish person, it was special to see these two young men connect on a romantic level as well as a religious one. Aciman, who is himself Jewish, stated, “There were two Jews in a place where there were no Jews—automatically one would seek out the other.” And I think many Jewish people would agree that a shared religious and cultural background can create a quick and strong bond.

But while I have my reservations, I do have to say that the impact of this movie and its presence at the Golden Globes is incredibly important. It’s not the first queer movie to be nominated for or win a top award, but every year that features queer narratives in our theaters, in our homes, and winning awards is a step forward.

And I think the most important thing this movie does is that it shows the emotional and sexual coming of age of a young gay man. This is something Moonlight did incredibly well last year, and now Call Me By Your Name joins the ranks of critically acclaimed films that focus on queer teens and young adults… something we don’t get a chance to see on the big screen often.

If you’ve seen Call Me By Your Name and/or read the book, I’d love to know what you thought about it! How does the book compare to the film, and what scenes from the book were adapted well… or not adapted at all?

Bonus question: what are some queer own-voices stories that you would like to see adapted to the big screen? Personally I’d love to see Tash Hearts Tolstoy, a YA novel with an asexual protagonist!

6 thoughts on “Book to Screen and the Golden Globes”