Paris, at the dawn of the modern age:

Prince Sebastian is looking for a bride―or rather, his parents are looking for one for him. Sebastian is too busy hiding his secret life from everyone. At night he puts on daring dresses and takes Paris by storm as the fabulous Lady Crystallia―the hottest fashion icon in the world capital of fashion!

Sebastian’s secret weapon (and best friend) is the brilliant dressmaker Frances―one of only two people who know the truth: sometimes this boy wears dresses. But Frances dreams of greatness, and being someone’s secret weapon means being a secret. Forever. How long can Frances defer her dreams to protect a friend? Jen Wang weaves an exuberantly romantic tale of identity, young love, art, and family. A fairy tale for any age, The Prince and the Dressmaker will steal your heart.

Content Warning for: Homophobia (people who are against a man dressing like a woman). This isn’t really a huge part of the story but there is the fear of homophobic reaction throughout the book.

Just a quick note before I get into the review. The author uses he/him pronounces and the Prince is a cis male, so I’m going to refer to him as gender non-conforming. Prince Sebastian cross-dresses, but it is unclear if there are any other sexual or gender identities at play. If I word anything in a way you think should be done differently, please let me know!

The art in this book was absolutely stunning. Of course Lady Crystallia’s dresses were drawn gorgeously, but the everyday parts of the story were done beautifully as well. I really liked the linework and how it showed the movement of the characters even though they were static/2D. I got a physical copy of the book, and I have to say that I am impressed with the quality. It has nice thick pages and is a pretty big book. I’d say it is a little wider than traditional graphic novel paper trades, and doesn’t have the same glossy finish.

The friendship between the prince and the dressmaker was the star of the show. I liked how their friendship evolved from a business-type relationship to deep friendship. There was good progression and the book clearly made their friendship believable. There was a lot of intimacy built between them because they were each other’s secret keepers, and it was interesting that the other main character was the one who immediately knew Sebastian’s secret. Usually there’s a lot of drama and build-up, but I liked that it was the two of them against the world.

Both the characters were loveable, but for me Frances was my favorite. I loved her creative drive and her artistry. She really helped the Prince bring Lady Crystallia to life, both with her designs and with her encouragement. Meanwhile Sebastian fosters her creative life and introduces her to big designers through his life as Lady Crystallia, but as Sebastian he keeps Frances a secret. Frances is tied to his Lady Crystallia identity and I liked the resolution of her secret identity as well as his. 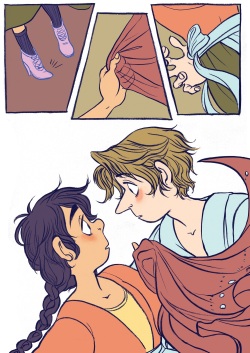 Meanwhile Sebastian and Lady Crystallia were two different characters in the book. Sebastian is unsure of himself as a royal and a leader, but as Lady Crystallia he is very confident and expressive. He is constantly torn between his royal duties, pleasing his family, and trying to figure out how to balance them with his other identity. I can’t really say much without spoiling a major plot line, but I liked how Sebastian’s relationship with his family was handled and how it changed throughout the story. *zips lips*

I can’t really comment on how accurate or relateable Sebastian’s dual identities were because I am a cis-het woman. However, I can say that there was a lot of thought and sensitivity put into his characterization. You can tell that the author didn’t just throw this together after randomly deciding to write a queer character. There was development of Sebastian’s identity outside of what his society would consider “normal” and how he handled it/how it affected him. There are people who support his dual-identity and people who don’t inside, but it is realistic and not done to add extra drama.

I really enjoyed this really charming YA graphic novel.

“Hi, I’m a cartoonist, writer, and illustrator based in Los Angeles. I’m also a co-founder and organizer for Los Angeles based comics festival Comic Arts LA.”

You can purchase The Prince and the Dressmaker from:

DMac loved this book so much that we want to give a paperback copy of The Prince and the Dressmaker to away to one lucky winner! To enter, all you have to do is comment on this post and tell us which Prince or Princess from books or movies is your all-time favorite!

10 thoughts on “The Prince and the Dressmaker, by Jen Wang (and PAPERBACK GIVEAWAY!)”