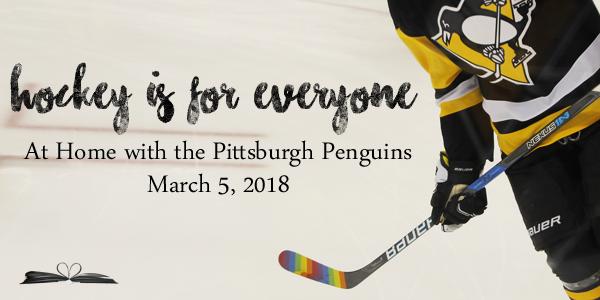 We spent part of February talking about Hockey Is For Everyone month and the impact that it has on us as queer fans. This past Monday, I had the chance to attend my second Hockey Is For Everyone game of 2018, and the first that highlighted the LGBTQ+ community.  That it was in my home arena, with my local team made it even more important to me. 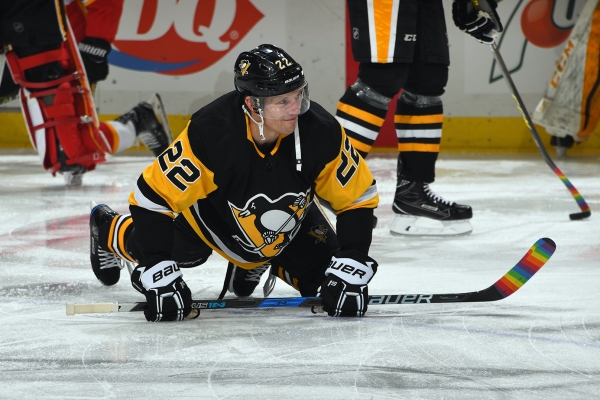 The Pittsburgh Penguins held their HIFE night on March 5th against the Calgary Flames. The decision to wait until this particular match-up was purposeful; the President of Hockey Ops for the Flames is Brian Burke, whose son helped to found the You Can Play organization whose motto “If you can play, you can play” aims to pave the way for queer athletes to play openly. The Flames have stood as one of the most vocal supporters of LGBTQ+ players in the NHL, and they didn’t disappoint on Monday; while it might have been a Penguins’ HIFE night, the Flames proudly sported Pride Tape on their sticks during warm-ups alongside their rivals-for-the-night.

A quick segue to Pride Tape: for those new to hockey, players use tape to wrap their stick blades and handles, which provides better grip. Pride Tape provides rainbow-striped tape (as seen in the photos scattered throughout this post), allowing players to show “a badge of support” for LGBTQ+ youth.

For fans like me, however, Pride Tape has a deeper symbolism. It’s an incredibly loud proclamation that says, “You’re welcome here.” Being a queer sports fan can be intimidating– I regularly hear racist, sexist, and homophobic slurs from the fans around me during games, and have seen reports about fans and players both being penalized for using them. So the Pride Tape is a visible sign that the League is making an effort to improve, to make the sport safe for everyone regardless of their background. It may sound cheesy, but Pride Tape says to me, “We’re all hockey fans here, and that’s all that matters.” 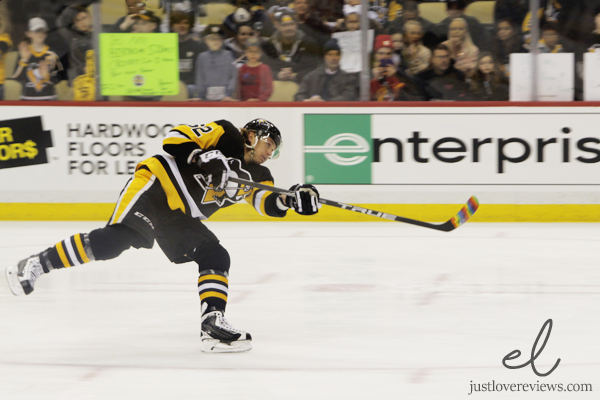 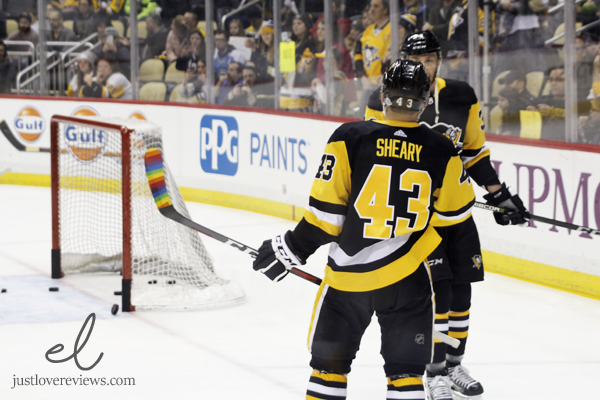 Going into Mondays’ game, the Penguins were already making an impact on local queer youths and athletes. The franchise provided complimentary tickets to over 200 students from Pittsburgh-area high school  gay straight alliances/gender sexuality alliances. Invitations were extended to local sled hockey, blind hockey, and other special hockey teams. Their social media team promoted the event, and were quick to shut down the haters.

Unfortunately, the Penguins’ HIFE ambassador, goalie Matt Murray, was unable to participate in the on-ice events during the game as he was out with an injury. But the rest of the team stepped up, representing the LGBTQ+ community with Pride Tape on their sticks at warm-ups and welcoming several kids to the ice during the national anthem to represent the future of hockey and the diversity within the sport. Videos played during intermissions and commercial breaks as well. 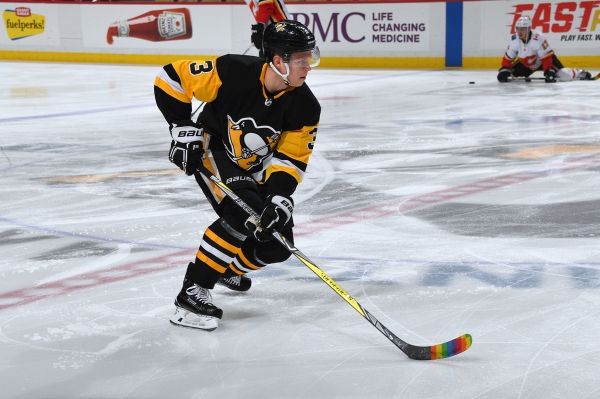 During intermission, me and Anna Zabo (author extraordinaire and my regular Penguins’ game buddy) wandered the halls and took in some of the sights. There were tables set up to learn about the organizations being supported– including the Pittsburgh Tigers, part of Pittsburgh Gay & Lesbian Hockey. But what astonished me even more were my fellow fans.

Everywhere I looked there were rainbows. People wore rainbow stickers on their jerseys, sported hats and t-shirts with pride versions of local team logos. Rainbow flags fluttered from the bars, and a giant puck wrapped in Pride Tape decorated the hallway.

I wrote something on twitter after the game ended:

Walking through PPG and seeing all of the rainbows tonight made me genuinely feel like I belong as a fan of this sport. It’s not perfect, and I wish teams remembered #HockeyIsForEveryone outside of this one month, but it’s still amazing to be surrounded by signs of inclusivity.

While equality and acceptance are making huge leaps and bounds in society these days, sports remain one of the few frontiers that lag behind the times. But the last five weeks have shown me that hockey is a sport that, while not perfect, is making a genuine effort to improve. 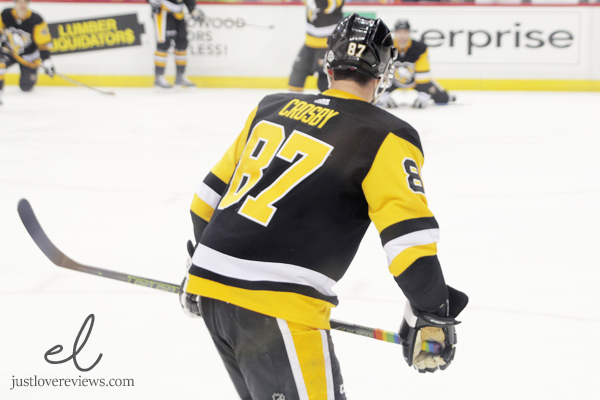 If you’d like to learn more about hockey, feel free to drop a comment or message us on twitter (@justlovereviews) to chat! Interested in learning more about queer hockey? A few things to check out:

Resources:
Hockey Is For Everyone
You Can Play Project
Pride Tape
NWHL (National Womens Hockey League)

Fiction:
The Scoring Chances Series, by Avon Gale
Him and Us by Sarina Bowen and Elle Kennedy

2 thoughts on “Hockey Is For Everyone: At Home with the Penguins”