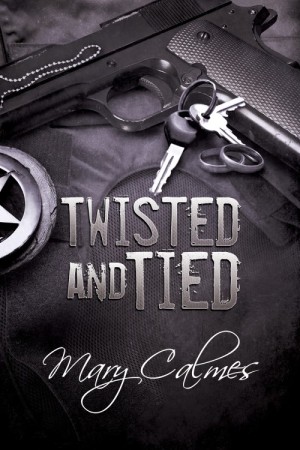 Deputy US Marshal Miro Jones finally has everything he ever wanted. He’s head-over-heels in love and married to the man of his dreams, his partner Ian Doyle, he’s doing well at work, and all his friends are in good places as well. Things are all tied up nicely… until they’re not.

Change has never been easy for Miro, and when situations at work force the team he’s come to depend on to break apart, and worst of all, his and Ian’s individual strengths put them on two separate paths, he’s pretty certain everything just went up in smoke. But before he can even worry about the future, his past comes for a visit, shaking his world up even more. It’s hard to tell what road he should truly be on, but as he learns some paths are forged and others are discovered, it might be that where he’s going is the right course after all. If he can navigate all the twists and turns, he and Ian might just get their happily ever after.

I did not enjoy Twisted and Tied quite as much as the previous books in the Marshals series. Not that this is at all a problem as you can tell by my star rating.

You have to understand that the previous books made me positively giddy with happiness and glee, so my assessment of the latest Marshals release is hardly a bad thing. Twisted and Tied proved to be a great read (I may or may not have let out a delighted whimper at the one-word opener, reminiscent of the book that started it all, All Kinds of Tied Down). Just… perhaps not as happy-making as its predecessors.

Part of the reason is probably because of all the changes to everyone’s (and I do mean everyone’s) lives. Just like in most Mary Calmes books, a lot happens – and quite often seemingly with no rhyme or reason. Her books just take you on a ride – Miro’s life is, in a word, eventful – and you as a reader kinda have to go with it. And it’s only at the most ridiculous, jaw-dropping point that you realize that you’ve fallen head over heels for the hero, as well their love interest, and even their colleagues, and don’t forget their friends, and most of all their dog. But I digress. It’s a Mary Calmes thing.

The thing is, I can’t say too much more without tripping over spoilers. The book picks up a handful of months after Tied Up in Knots. As expected, Twisted and Tied continues on Miro and Ian’s journey together and most importantly, wraps up some loose ends that had been lingering throughout the length of the series. The book comes off as heavier in tone despite retaining its signature gut-busting verbal exchanges and kaleidescopic plot.

I did get a bit impatient (downright anxious in some cases) with all the inevitable detours in the story but only because my panic matched Miro and Ian’s when it came to all the curveballs being thrown their way. Ultimately, I think fans of the series will be over the moon with this installment as it’s been a long time coming and, as in my case, Twisted and Tied will ultimately leave them feeling highly satisfied and quietly relieved for our two heroes. It also sets the stage nicely for MOARRR Marshals – starring some new yet familiar faces <shifty eyes> – and I am so here for it.

Mary Calmes believes in romance, happily ever afters, and the faith it takes for her characters to get there. She bleeds coffee, thinks chocolate should be its own food group, and currently lives in Kentucky with a five-pound furry ninja that protects her from baby birds, spiders and the neighbor’s dogs. To stay up to date on her ponderings and pandemonium (as well as the adventures of the ninja) follow her on Twitter @MaryCalmes, connect with her on Facebook, and subscribe to her Mary’s Mob newsletter.

You can purchase Twisted and Tied from: