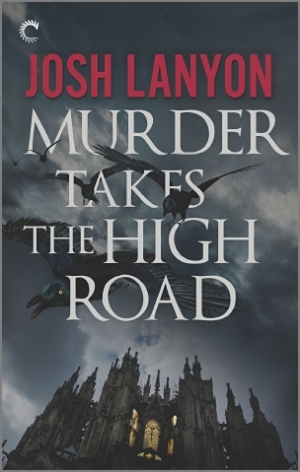 Librarian Carter Matheson is determined to enjoy himself on a Scottish bus tour for fans of mystery author Dame Vanessa Rayburn. Sure, his ex, Trevor, will also be on the trip with his new boyfriend, leaving Carter to share a room with a stranger, but he can’t pass up a chance to meet his favorite author.

Carter’s roommate turns out to be John Knight, a figure as mysterious as any character from Vanessa’s books. His strange affect and nighttime wanderings make Carter suspicious. When a fellow traveler’s death sparks rumors of foul play, Carter is left wondering if there’s anyone on the tour he can trust.

Drawn into the intrigue, Carter searches for answers, trying to fend off his growing attraction toward John. But as unexplained tragedies continue, the whole tour must face the fact that there may be a murderer in their midst—but who?

No one does m/m mystery quite like Josh Lanyon and this fun and engaging homage to Agatha Christie was quintessential Lanyon, full of colourful characters, red herrings and sexy night time shenanigans.

Set against a forbidding but beautiful Scottish Landscape, Murder Takes the High Road takes place during the aptly named ‘Tour to Die For’, a bus tour taking a group of mystery-loving tourists – including librarian, Carter Matheson – through some of the settings featured in the books of Vanessa Rayburn, a novelist with a shady background of her own. The tour is to culminate in a visit to Vanessa’s remote castle, with a chance to meet the author herself.

Carter originally planned and paid for this trip back when he was still with his then boyfriend Trevor. But he’s damned if he’s going to let a cheating jerk make him miss the opportunity to meet his favourite author, even if said cheating jerk is bringing his new lover. Fortunately (or unfortunately), there’s little time to worry about spending his vacation with an ex-boyfriend when there’s a rumour of murder, the arrival of a sexy, mysterious stranger and the disappearance of tour group members to deal with. Suddenly, fictional foul play is turning very real indeed.

I don’t know if this book made me want to join a tour group of stay very far away from one, but it sure made them sound entertaining all the same. One of the things I love about Lanyon’s writing is that she fully develops and describes her side characters so you can not only picture them, you feel like you’re getting to know them. Getting to know all the different characters was part of the fun, making it feel like you were on this tour with them.

The other thing I love is that she’s not afraid to use a variety of settings from all over the world. I have a particular affinity for Scotland (being that my whole family is from there) and so this book almost felt like visiting old friends in a way. It felt familiar and maybe that’s partly due to the setting but also because this reads like an old-fashioned mystery novel, the kind you want to read while wrapped in a blanket while drinking a cuppa.

If you’re new to Laynon, this would be a great place to start. If you’re already a fan, you won’t be disappointed. Either way, Murder Takes the High Road is a nicely paced, entertaining story that will keep you engaged from beginning to end.

Her work has been translated into eleven languages. The FBI thriller Fair Game was the first male/male title to be published by Harlequin Mondadori, the largest romance publisher in Italy. Stranger on the Shore (Harper Collins Italia) was the first M/M title to be published in print. In 2016 Fatal Shadows placed #5 in Japan’s annual Boy Love novel list (the first and only title by a foreign author to place on the list).

The Adrien English Series was awarded All Time Favorite Male Male Couple in the 2nd Annual contest held by the Goodreads M/M Group (which has over 22,000 members). Josh is an Eppie Award winner, a four-time Lambda Literary Award finalist for Gay Mystery, and the first ever recipient of the Goodreads Favorite M/M Author Lifetime Achievement award.

You can purchase Murder Takes the High Road from: