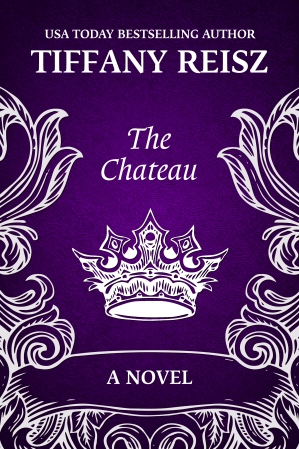 As the Jack-of-All-Wicked-Trades for a secretive French military intelligence agency, 24-year-old Lieutenant Kingsley Boissonneault has done it all—spied, lied, and killed under orders. But his latest assignment is quite out of the ordinary. His commanding officer’s nephew has disappeared inside a sex cult, and Kingsley has been tasked with bringing him home to safety.

The cult’s holy book is Story of O, the infamous French novel of extreme sado-masochism. Their château is a looking-glass world where women reign and men are their willing slaves. Or are they willing? It’s Kingsley’s mission to find out.

The Chateau was a wonderful reminder of why I fell in love with Tiffany Reisz’s writing. Not only does she make kink sexy, she also makes it funny and smart and painfully real – pun intended. For me, she is also Mistress of the Mindfuck and Kingsley’s tale of sexual discovery definitely delivers in all the best ways.

“A cult? Really? In France ?” Kingsley couldn’t keep the surprise out of his voice. “Are you sure you’re not thinking of the Catholic Church?”

“So it is the Catholic Church.”

“I only fuck university students,” Kingsley said between bites. “They don’t even know where to buy pot, much less guns.”

“Fucking university students is my cover,” he said.

Those familiar with Kingsley Edge of Original Sinners fame will not at all be surprised that Kingsley Boissonneault makes a fantastic hero even in his twenties – smart, sexy and deadly. His ennui leaves him no room to escape the memories tormenting him, so he is more than happy to dash off into the unknown to investigate the enigmatic and beautiful Madame.

Thus begins Kingsley’s journey of self-discovery. Or in his case, a rediscovery. Since joining the French Legion, he had reverted to his skirt-chasing ways and abstained from kink. But at the feet of Madame and her brand of tough love (spoiler alert: that’s an understatement), he learns to accept all the facets that make up his true nature. She was as much mother figure as she was personal tormentor, and her lessons left a lasting impression on young Kingsley.

“He tied you up to tell you he never wanted you to leave him. He bit you because you were the food to his soul. He struck you to mark you as his possession, as a valuable he would want returned to him if lost or stolen. That’s why you miss it, Kingsley. That’s why you miss the pain. Because every time he hurt you, he was trying to tell you in the only way he could how much he loved you.”

To be honest, I never really connected with Madame, but I’m not really sure I was meant to. To borrow a reference from the book, the story had a decidedly Alice Through the Looking Glass feel to it  and possessed a surreal, dreamlike quality. The plot was twisted and cruel – something I’ve come to expect from Reisz – but what held my attention was young Kingsley and his overwhelming charm, bravado and yes, innocence. My absolute favorite part was the sharp repartee between the characters (another Reisz signature) – funny, cutting, and often both. I was thoroughly amused by the early exchange between King and his blundering colleague, but seriously, a smitten Kingsley had me flat-out weeping with laughter.

Born in Owensboro, Kentucky, Tiffany graduated from Centre College with a B.A. in English. She began her writing career while a student at Wilmore, Kentucky’s Asbury Theological Seminary. After leaving seminary to focus on her fiction, she wrote The Siren, which has sold more than half a million copies worldwide.

Tiffany lives in Lexington, Kentucky with her husband, author Andrew Shaffer, and two cats. The cats are not writers.

You can purchase The Chateau from:

2 thoughts on “Release Day Review by Rafa: The Chateau, by Tiffany Reisz”