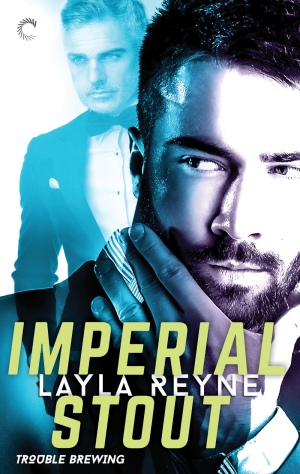 It’s a good thing assistant US attorney Dominic Price co-owns a brewery. He could use a cold one. Nic’s star witness has just been kidnapped, his joint operation with the FBI is in jeopardy, his father’s shady past is catching up with him and the hot new special agent in San Francisco is the kind of distraction best handled with a stiff drink.

Kidnap and rescue expert Cameron Byrne has his own ideas about how to handle Nic, but his skills are currently needed elsewhere. The by-the-book FBI agent goes deep undercover as a member of an infamous heist crew in order to save Nic’s witness, break up the crew and close the case before anyone else gets hurt. Nic in particular.

Things heat up when Cam falls for Nic, and the witness falls for Cam. As the crew’s suspicions grow, Cam must decide how far he’s willing to go—and how far into his own dark past he’s willing to dive—to get everyone out alive.

Before I get to the meat of it all, I just want to say I really liked a lot about this book. There are many I really enjoyed, and moments that were so fun and brought me back to some of the feelings I had while reading the Agents Irish & Whiskey series. I really like Cam and Nic a lot, mostly because they’re actual adults who deal with relationship issues in an adult way. Still, I had a hard time with this one.

Cam is an FBI agent, Nic a United States Attorney… the case they are working on was interesting and a lot of fun so that the suspense of the story was great. My issues with the case stem around how unbelievable the working relationships between the two offices worked. This, coupled with the inclusion of ex-FBI members, and family being included in some of the planning, and execution of missions, I had to stop reading a few times. I can suspend my belief to a certain level, like one or two times, but when I have to do it through the entirety of a story, it becomes harder to do.

And while this story can be read as a stand alone, it might not be for some. I think that some readers could be a bit confused if they have not read the Agents Irish & Whiskey series first, where we first meet these two MCs. I might take a little bit of patience for a reader to get to the point where they are caught up on past events, as much as the book does that, to get to a point where they can see how the relationship had already started, but was just not quite there. Nic and Cam dance around each other a lot in the previous series so unless you know that already, it might not be especially clear to a new reader.

I also wish we got more one-on-one time for Nic and Cam. The case does have them working together a lot, but they are often separated, and when they’re not, they have a lot of other people with them. I wanted more time with them getting to know each other better, talking, having moments that mean something more than just a few little things they were able to get out because when they do have those moments, they’re really great.

I honestly think that this book was a nice and fun read, but mostly because I’ve read the previous series, already know these guys, and have a good frame of reference for their lives and already know all the side characters. Readers who have not already been introduced to this world may have more trouble feeling the connections, understanding all the players and how they fit into Nic and Cam’s lives, and getting all that history that’s there. I do think that this is a good starting point for the rest of the series, and I’m looking forward to where Reyne takes the rest of the series, and more hot times with Nic and Cam.

Layla Reyne was raised in North Carolina and now calls San Francisco home. She enjoys weaving her bi-coastal experiences into her stories, along with adrenaline-fueled suspense and heart pounding romance. When she’s not writing stories to excite her readers, she downloads too many books, watches too much television, and cooks too much food with her scientist husband, much to the delight of their smushed-face, leftover-loving dogs. Layla is a member of Romance Writers of America and its San Francisco, Kiss of Death, and Rainbow Romance Writers chapters. She was a 2016 RWA® Golden Heart® Finalist in Romantic Suspense.

You can purchase Imperial Stout from: