This weekly meme is hosted by The Broke and the Bookish.

Love ’em or hate ’em, but Hollywood is really loving book adaptations right now. And it’s not just the silver screen that’s getting the literary treatment; Game of Thrones is one of the most-watched shows in the world, and The Magicians and Shadowhunters are coming to cable very soon.

Here are ten book adaptations that I can’t wait to see (in no particular order):

The Magicians (TV: SyFy), based on the books by Lev Grossman

The college version of Harry Potter, only Grossman pulls no punches. This is a world of sexuality, violence, and the horrible realization that childhood dreams aren’t all that they’re cracked up to be. The show has aged the characters from undergrad to graduate school (for logistic reasons, as the books cover several years after graduating), but the characters look stunning!

The Scorpio Races (Movie), based on the book by Maggie Stiefvater

I am an unapologetic Stievater nut. So the upcoming adaptation of her YA fantasy novel is pretty high on my list of MUST SEES! There’s no official release date yet, but I’ll definitely be at the midnight showing.

Suicide Squad (Movie), based on the DC comics

I’m not a huge DC fan, but this movie looks amaaaaaazing, and I’ve heard great things about the comics that its based off of.

Deadpool (Movie), based on the Marvel comics

But I am a huge Marvel fan, so let me ramble for a second about Deadpool. It’s going to be violent. It’s going to be filthy. It’s going to make you want to touch yourself. Probably. And they’re sticking to the comics in a big way… the director just emphasized in an interview that Deadpool will be played as pansexual!

American Gods (TV: Starz), based on the book by Neil Gaiman

There’s not a lot of information available yet about this series, but we know that it’s being directed by Bryan Fuller of Hannibal and Pushing Daisies fame, and Gaiman is writing the script. They’ve spoken about being true to character descriptions, too, so I have very high hopes for this show!

Miss Peregrine’s Home for Peculiar Children (Movie), based on the book by Ransom Riggs

We still have 13 months until this movie hits the big screen, but with an all-star cast (Samuel L. Jackson, Eva Green, and more), and an amazing text to pull from, I’m really excited for what I hope will be an eerie, gorgeous movie. AND IT’S TIM BURTON DIRECTING OMG!

Fantastic Beasts and Where to Find Them (Movie), based on the book by J.K. Rowling

I know, you’re wondering why this wasn’t the VERY FIRST THING on my list. Two reasons: one, thinking about it too hard makes me want to cry because I WANT IT NOOOOOOOW, and two, I’m still freaking out about seeing the Cursed Child stage play in London next July.

The B.F.G. (Movie), based on the book by Roald Dahl

I literally just heard about this the other day, and quietly freaked out. There’s next to no information available for it, other than a summer 2016 release date and the fact that Jemaine Clement (from Flight of the Conchords!!!) will be in it.

The Chronicles of Narnia: The Silver Chair (Movie), based on the book by C.S. Lewis

IS THIS A RUMOR? I have no idea. I can’t find ANYTHING about it, other than an IMDB page, but I’m including it because I really love the first three Narnia movies. I have them all on DVD, and watch them when I need a comfort film. In fact, my collection of the books is one of my most prized possessions (a hard-to-find edition given to me in bits and pieces by family members as they found books from the set in used bookstores over several years).

Shadowhunters (TV), based on the books by Cassandra Claire

While I personally am not anticipating this series, I know that a lot of people are. It starts up soon, and I’ve seen a lot of promo for it:

What TV and movie adaptations are you looking forward to?

As always, this weekly meme is hosted by The Broke and the Bookish.

I’m walking down the road, and a lamp falls out of the sky. No, seriously, an honest-to-god lamp. Like, tarnished, gold, looks pretty old. No idea where it came from, but I’m just glad it didn’t hit me on the head.

And hey, beneath that tarnish it’s not all that ugly. Maybe if I just give it a good scrub with my sleeve, I can get a few bucks for it at the pawn shop. Let’s see now…

What the heck is this? A genie? Wait a second, I know this story. I mean, I read a ton of books, surely you don’t think I’ve read some with genies in them? So alright then, Mr. Genie, I get a few wishes, right?

1. I wish for… more good book-to-screen adaptations! I love seeing my favorite stories come to life, and there are some very promising upcoming adaptations, like Lev Grossman’s The Magicians (SyFy, early 2016) and Neil Gaiman’s American Gods (2016). 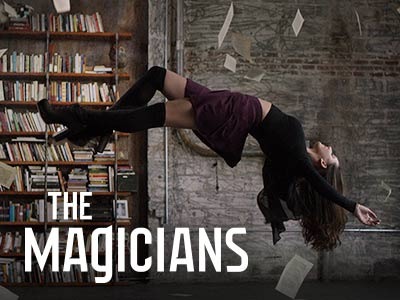 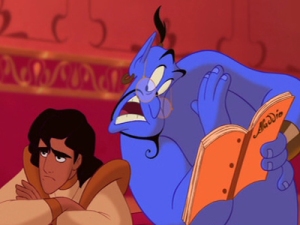 3. And while you’re at #2, Genie… can I have the sequel to Six of Crows by Leigh Bardugo? Pretty please?

4. Genie, I wish… for more ace and trans romance novels. There are so few of them out there, and I would love some new ones! I just saw that L.A. Witt is writing an asexual romance, though!

5. I wish, I wish, to… win a shopping spree in a bookstore. Seriously, gimme a blank check and a few hours in a bookstore, and I will be the happiest person in the world. Or, hey, maybe a lotto win? SO I CAN BUY MORE BOOKS, OF COURSE!

6. Wishing upon a magic lantern for… a few of my Dream Author Teams to collaborate on books?

7. I wish that… American book covers weren’t so ugly compared to overseas book covers. Yeah, this comes out of left field, but it’s SO TRUE! I mean, just look at the US vs UK cover for Rivers of London by Ben Aaronovitch (published in the US as Midnight Riot for some ungodly reason):

8. I wish, oh great Genie, for… eBooks that aren’t ridiculously over-priced. Why would I pay $15 for an eBook when the hardcover is only $17? (Yes, Career of Evil by Robert Galbraith, I’m looking at you!)

9. I wish that… authors were treated with the same level of awe and fame as football players. I mean, one of these professions transports you to another world, and the other involves a bunch of sweaty dudes in spandex throwing balls around. (Also, let’s throw teachers in with the authors on this wish, if you don’t mind!)

10. For my last wish, Genie… I wish you were free! Oh, wait, you already are? Well, okay then, I wish for the simple pleasure of a good book, warm blankets, tasty snacks, and the sound of rain on my window.

Window art at the neighboring Starbucks.

I went to Comic-Con with every intention of blogging the entire event… but as you can see, that didn’t happen. What did happen was a solid four and a half days of meeting up with old friends, having adventures, and generally not sleeping enough. It was a crazy weekend, and I walked away with some fantastic memories! Now that I’m home from my vacation, here are my top five moments from SDCC 2015:

1. Meeting Maggie Stiefvater. I’m a huge fan of The Raven Cycle series, and was looking forward to her one panel at the con, Fantasy Literature. It was a great panel, but the highlight was actually meeting Maggie herself at a signing after! She autographed my copy of The Raven Boys and a copy of The Dream Thieves for my friend, and was nice enough to take a picture with me (which I won’t be sharing, sorry!).

Two of the many amazing “Frozen” cosplayers.

2. Cosplayers. Oh man, I love meeting creative people who sew their own costumes and transform themselves into their favorite characters. Cosplaying (costume roleplaying) is such a strange concept, when you stop to think about it; people spend hundreds of hours of their lives to turn themselves into their favorite fictional persona, all for a day or two of entertainment. I love it! Maybe one day I’ll get up the courage to get a costume on…

Lev Grossman at his spotlight panel.

3. Seeing the trailer and a special scene from The Magicians television show. Based on the best-selling trilogy by Lev Grossman, the show is not airing on SyFy channel until 2016. But we got to see the never-before-seen trailer at a Book to Screen panel, and then a clip from the first episode at Lev Grossman’s spotlight panel. I love these books (which are like Harry Potter goes to college), and the show looks awesome!

4. Meeting Leigh Bardugo and getting an ARC of Six of Crows. I love Bardugo’s Grisha Trilogy, and was thrilled to see that she was doing a signing at SDCC. And even better, the nice lady at the booth informed me that she’d be giving away signed copies of her newest, unreleased novel, Six of Crows… but only to the first fifteen people in line! While my friends were camping out overnight to go see some movie panels in the massive Hall H, I was lining up at 6:30am to be the first in line to meet Leigh Bardugo, who is hands-down one of my favorite authors! (PS, I totally was the first in line. YAY!) 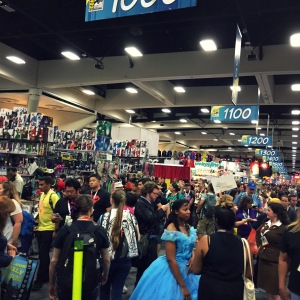 Just one of the many aisles in the Expo Hall.

The Penguin booth during a book giveaway.

5. People-watching. SDCC is a madhouse at the best of times, and a chaotic vortex at the worst. There are 200,000 people crammed into a space with the physical capacity from probably only 199,999, which means everyone is just a bit too close, and there are crowds everywhere you look. But there’s something very comforting about being surrounded by so many people who are so passionate about the things they love. No one there can judge you if you’re obsessed with Spiderman, or My Little Pony, or if you line up before sunrise to meet an author you love!

So thanks for a great Comic-Con, San Diego! I’m not sure if I’ll be back next year, because I really want to attend Book Expo America and maybe one other book con, but I’ll definitely do my best!