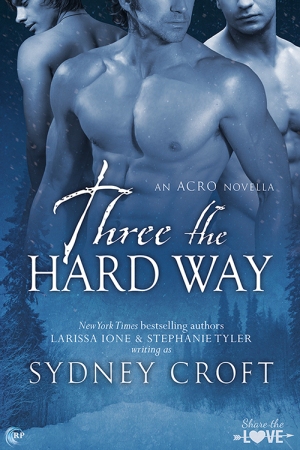 Lovers Taggart Brody and Justice McKinney possess special abilities that make them valuable to agencies who employ—or enslave—people with extraordinary talents. When tragedy tears them apart, Justice finds purpose working for the good guys: ACRO, the super-secret Agency for Covert Rare Operatives. But he never forgets Taggart or the past they once shared.

Heartbroken, Taggart runs from who he is . . . right into the arms of Ian Bridges. But Ian, battling his own demons, betrays Tag to the terrorist organization Itor. After months of torture, Tag manages to escape, but kills an ACRO agent in the process.

With nowhere left to turn, Tag disappears into the Alaskan wilderness, but it’s only a matter of time before his enemies track him down. He reaches out to Justice, and somehow Ian finds him too, hoping to right his wrongs. With ACRO and Itor both bearing down, the three men must figure out how to forgive, how to work together, and how to love each other—or the coming battle will destroy them all.

Instead, it hit my NOPE list over and over (and over) again.

Let’s start with the good.

I really liked Tag and Justice’s relationship. They grew up together, were each other’s first loves, and then tragedy pulled them in opposite directions. The obvious love they have for each other, combined with the distrust, the desperation, and the desire? That’s something the authors definitely nailed.

Okay, now for what I didn’t like. Which was, unfortunately, most everything else.

1. The “men are sluts” trope. It’s not appealing to me. It’s not even realistic, especially when written this way. Ian is a spy, has already betrayed Tag once, but Tag’s dick is going to override logic?

Men were so easy. Women, it took way more effort to seduce them. They needed sweet talk and compliments. Men? They just needed to see a hard cock, and it was like a beacon to them. Justice’s tongue was practically hanging out of his mouth.

2. Using condiments as lube. Gross. Take the three steps to the bedroom and stop using butter.

3. Love him/Hate him. Tag goes back and forth between loving and hating Ian and Justice so fast that I got whiplash trying to keep up. Neither of them have been particularly good to him. Tag’s been through some tough times. And yet, he’s ready to drop trou and bend over. In between being angry, or throwing a punch, of course.

“Besides, I only got him kidnapped. You accused him of killing your mothers.”

4. How much sex can three men who hate each other actually have? They have sex the moment they reunite. They have sex while one of them is recovering from a concussion and serious injury. They have sex in barns. They have sex over couches. Okay, it’s erotica, I get that there’s a lot of sex… but aren’t these men concerned about, I dunno, the avalanche that almost killed them? Or the winter storm that might kill them? Or the evil agents trying to kill them? Nope? Okay, time for more sex.

This is not the high quality that I’d expect from Ione and Tyler (-slash-Jakes). I’ve read multiple novels by both authors, but this one just didn’t do it for me.

But if you’re looking for pure, mindless smut with a bunch of alpha males? This might be your thing.

Larissa and Stephanie live in different states and communicate almost entirely through email, though they often get together for conferences and book signings.

Find them online at http://sydneycroft.com/

You can purchase Three the Hard Way from:

2 thoughts on “Book Review by El: Three the Hard Way, by Sydney Croft”