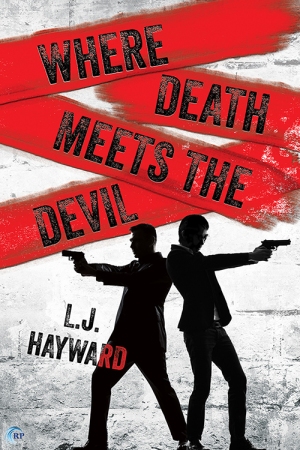 Jack Reardon, former SAS soldier and current Australian Meta-State asset, has seen some messy battles. But “messy” takes on a whole new meaning when he finds himself tied to a chair in a torture shack, his cover blown wide open, all thanks to notorious killer-for-hire Ethan Blade.

Blade is everything Jack doesn’t believe in: remorseless, detached, lawless. Yet, Jack’s only chance to survive is to strike a bargain with the devil and join forces with Blade. As they trek across a hostile desert, Jack learns that Blade is much more than a dead-eyed killer—and harder to resist than he should be.

A year later, Jack is home and finally getting his life on track. Then Ethan Blade reappears and throws it all into chaos once more. It’s impossible to trust the assassin, especially when his presence casts doubts on Jack’s loyalty to his country, but Jack cannot ignore what Blade’s return means: the mess that brought them together is far from over, and Ethan might just bring back the piece of Jack’s soul he thought he’d lost forever.

The story was fast-paced, action-packed and brilliantly plotted. In a word, it was intense. It was chock full of intrigue and kept me guessing till the very end. Even when I knew something was coming, the storytelling kept me fully engaged as each new layer was ripped away. If it hasn’t been made clear yet, I really, really loved this book.

But that’s not all. What could I possibly enjoy more than a fantastic romantic suspense?

The book was set in Australia with an Aussie MC and a British nemesis-slash-love interest. Jack and Ethan were a sublime pairing. Both highly skilled and equally as dangerous, they were quite evenly matched yet at complete odds from the word go. As a loyal soldier and a hired assassin respectively, Jack and Ethan were total opposites in all the ways that mattered – or so it would seem.

Using Jack’s third person POV, the author fed us delicate bits of insight into both characters a little at a time – enough to entice but not to the point of giving too much away. I lived for the crackling dynamic between Jack and Ethan – from the raging distrust to grudging dependency to simmering desire. The slow burn between them was exquisite and it didn’t even feel a long time coming because of how much action there was otherwise. The ending was a pitch perfect HFN – with just a hint of their future together – that left me daydreaming about our heroes many days later.

The book was a surprisingly quick read despite the high page count. It’s probably also worth mentioning that there wasn’t much in the way of Aussie colloquialisms to trip up a foreign reader (or at least not that I noticed). Hayward is a new-to-me author but you can be sure I will be on the lookout for more of her work. If you like romantic suspense – even a little bit – Where Death Meets the Devil  is for you.

L.J. Hayward has been telling stories for most of her life. Granted, a good deal of them have been of the tall variety, but who’s counting? Parents and teachers notwithstanding, of course. These days, the vast majority of her story telling has been in an honest attempt to create fun and exciting ways of entertaining others (and making money).

As such, she is still a mad (always provoked!) scientist in a dungeon laboratory (it has no windows. Seriously, the zombie apocalypse could be going on outside and she’d have nary a clue) who, on the rare occasions she emerges into the light, does so under extreme protest and with the potential hazard of bursting into flames under the southeast Queensland sun.

You can purchase Where Death Meets the Devil from: